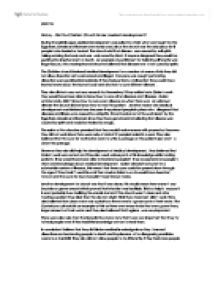 History - Did the Christian Church hinder medical development? During the Middle Ages Medical development was pulled to a halt, what was taught by the Egyptians, Greeks and Romans were rarely used, since the church was the only place for ill people to be healed or treated. The church said that disease was caused by evil spirits taking entering the body and was only cured by God ; if anyone disagreed they would be punished by imprisonment or death. An example of punishment for believing differently was Roger Bacon, who was imprisoned since he believed that diseases were not cured by spirits. The Christian church hindered Medical development for a number of reasons firstly they did not allow dissection as it was banned and illegal. ...read more.

The saints at the churches promised that they would heal everyone with prayers but however they did not work since there were only a total of 31 people healed in a year. They also believed that the cure for toothaches were to write a passage on the patients jaw and to chant the passage. However they also did help the development of Medical development, they believed that Galen's work was correct and they also used various parts of his knowledge while treating patients. They would have been able to heal more people if they accepted more people's views and knowledge about medical development. Galen already had cures for a substantial number of illnesses, this meant that these cures could be passed down through the ages. ...read more.

The Canterbury cathedral is an example of this as there were many herbs that were grown there, larger amounts of fresh water and they also believed that hygiene was very important. There were also rules from the Benedictine monastery that it was very important that they try to heal people even if they had little knowledge on how to heal them. In conclusion I believe that they did hinder medical knowledge since they banned dissections and sentencing people to death and imprisonment for disagreeing medicine came to a standstill. They also did not allow people to try differently, if they had more people would have been like Galen and new cures couldn't be found. However they did try to help heal people without realising that they were halting the development of medicine. ?? ?? ?? ?? Alvin So ...read more.