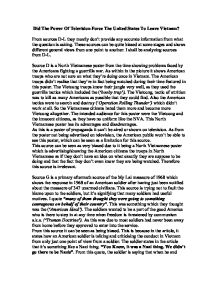 Did The Power Of Television Force The United States To Leave Vietnam? From sources D-L they mostly don't provide any accurate information from what the question is asking. These sources can be quite biased at some stages and shows different general views from one point to another. I shall be analyzing sources from D-L. Source D is a North Vietnamese poster from the time showing problems faced by the Americans fighting a guerrilla war. As within in the picture it shows American troops who are not sure on what they're doing once in Vietnam. The American troops didn't realise that they're in fact being watched during their time featured in this poster. The Vietcong troops knew their jungle very well, as they used the guerrilla tactics which included the ('booby trap'). The Vietcong, tactic of attrition was to kill as many Americans as possible that they could find. Also the American tactics were to search and destroy ('Operation Rolling Thunder') which didn't work at all. So the Vietnamese citizens hated them more and become more Vietcong altogether. The intended audience for this poster were the Vietcong and the innocent citizens, as they have no uniform like the NVA. This North Vietnamese poster has its advantages and disadvantages. As this is a poster of propaganda it can't be aired or shown on television. As from the poster not being advertised on television, the American public won't be able to see this poster, which can be seen as a limitation for this source. ...read more.

Source H is a primary cartoon source published in the British magazine ('Punch') in 1967. The presentation of this cartoon shows us how funds and currency which should have been spent on Johnsons "Great Society" being wasted upon the war in Vietnam. This source can be seen as quite biased, as the cartoon source is aimed at the British public because if the American citizens seen the pictorial, they would start and debate on why this is occurring. Also they would start to question and doubt whether in reality Johnson was being untruthful and dishonest to them because of what was happening with the "Great Society". It has its limitations, because it's unrelated to American television as it's a pictorial cartoon source that's not being aimed at the American citizens, but is being aimed at the British instead. Source F is a primary speech of an anti-war American journalist called Richard Hamer written in 1970 according the provenance from an American view of difficulties of fighting guerrillas. This source tells us that the USA soldiers did not know their enemy, as normal peasants were attacking them. "Did one of them (the peasant's) lob the mortar? If so which one? Should you kill all of them or none of them?" It's saying that the U.S.A soldiers were using wrong tactics to persuade citizens to side with them, "One does not defoliate (destroy vegetation in) ...read more.

This is because Source E, made Americans despise Vietnam Veterans and request in favour of withdrawal of the American soldiers. From the source E, the effects of the American bombing of napalm could have been actually used as a proclamation of (propaganda). As within Source J, the time when the anti-war photograph protest at Kent State University was modified and produced and published, the American citizens were able to watch the Television and were horrified to discover on what precisely they became a part of. As when the American citizens established this, they didn't want to become a part of this no longer to and further extent. They all approved that it was time for the American soldiers to come back home, wanting this, they setup and started to protest and rebel. So to the question that needed to be answered, referring and into response as to the question "Did the power of the television force the United States to leave Vietnam?" I would imply; "Yes", as this did play an enormous role as to why the media force led the United States to leave Vietnam entirely. Lastly, the rest of the sources 'D, F, G, H, K & L' doesn't give much in aspect that are really useful, including articles and pictures unlike source E & F. It also doesn't make a difference on the American citizens' agreements or why the American troops left Vietnam entirely. By Jordan Alexander-Riley ...read more.