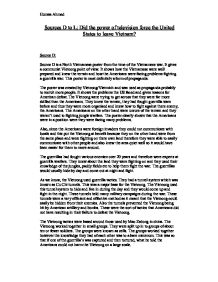 Did the power of television force the US to leave Vietnam?

Sources D to L: Did the power of television force the United States to leave Vietnam? Source D: Source D is a North Vietnamese poster from the time of the Vietnamese war. It gives a communist Vietcong point of view. It shows how the Vietnamese were well prepared and knew the terrain and how the Americans were facing problems fighting a guerrilla war. This poster is most definitely a form of propaganda. The poster was created by Vietcong/Vietminh and was used as propaganda probably to recruit more people. It shows the problems the US faced and gives reasons for American defeat. The Vietcong were trying to get across that they were far more skilled than the Americans. They knew the terrain, they had fought guerrilla wars before and thus they were more organised and knew how to fight against there enemy, the Americans. The Americans on the other hand were unsure of the terrain and they weren't used to fighting jungle warfare. The poster clearly shows that the Americans were in a position were they were facing many problems. Also, since the Americans were foreign invaders they could not communicate with locals and this put the Vietcong at benefit because they on the other hand were from the same place and were fighting on there own land therefore they were able to easily communicate with other people and also knew the area quiet well so it would have been easier for them to move around. The guerrillas had fought various enemies over 20 years and therefore were experts at guerrilla warfare. They knew about the land they were fighting on and they used their knowledge of the jungles, paddy fields etc to help them fight the war. The guerrillas would usually hide by day and come out at night and fight. As we know, the Vietcong used guerrilla tactics. They had a tunnel system which was known as Cu Chi tunnels. ...read more.

News of this atrocious event did not reach the American public until November 1969.Journalist Seymour Hersh published a story with details of his conversations with a Vietnam veteran called Ron Ridenhour. Before Ron Ridenhour spoke to Hersh, he had appealed to the congress the pentagon and the white house to investigate this matter and the result of the investigation was that Calley's was charged with murder in September 1969.Hersh's story was published two months later. The news of the massacre led to shock throughout the American public. Many people began to see how the conduct and morale of the American Army had dwindled. Was this the America everybody knew? Is this why America went into Vietnam, to kill innocent people? This source shows that things went wrong with the American policy. The soldiers never went into Vietnam to behave like "Nazis" they went in to fight for their country. They "went in to service". This is implying that the soldiers went their for a good cause, for their country but the ended up behaving like savages. The soldier's reaction to this is that he knows what happened was wrong but he also knows that the soldier's intentions were not wrong. They went in with a good heart but didn't realise what they were doing. The My Lai massacre came as a shock to the American public and establishment. Soldiers themselves were shocked and ashamed. This solider is not an eyewitness but he had heard about the massacre and was giving his opinion on why it took place. We can tell that the solider is disappointed by what happened. He is also ashamed at how the soldiers behaved yet he does mention that they did not intentionally behave in this way. What made the incident even more embarrassing was the fact that straight after the killing, the Americans tried to cover it up. The Americans also tired to cover up the bombing in Cambodia and Laos. ...read more.

One of the US battalion is hugely out numbered by the North Vietnamese division. At the end of the movie the Americans leave once all the men have been recovered from the battle field. This movie was made after the war. It was not made for historical reasons but as a form of entertainment to viewers therefore it isn't reliable because this means the scenes and events could be over exaggerated or altered to make the movie look more drastic and more 'Hollywood'. This movie is not a form of propaganda as it was not produced at the time of the war. For this reason it was not produced to influence people into taking sides or anything of the sort. The movie was purely a form of entertainment based on a book and true event that took place in Vietnam. As we already know Hollywood movies like this tend to over exaggerate and focus on certain aspects of the theme. Therefore we cannot look at this movie and say without doubt that it is accurate because this would be false. This source does not prove that television caused the Americans to leave Vietnam. In the source there are other reasons for the defeat of the Americans. These reasons include the enemy out numbering the American troops. In my opinion the main aim of this source was to show the audience how heroic and courageous the Americans were. Even though they were out numbered they put up a good fight. They showed true togetherness and they would never leave another American on the battle field. The men cared for each other and worked as a unit. Even though the Americans lost the war they fought bravely and that's what made them true men. The film favours the Americans in that even though the Vietnamese win the war, the main focus is on the American troops and how they struggled and carried on in Vietnam. They may not have been portrayed in a very heroic way but they are not shown as being the 'losers' either. ?? ?? ?? ?? Humza Ahmed ...read more.