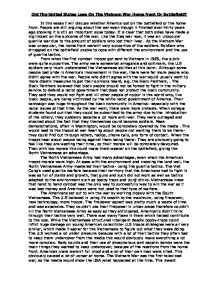 In this essay I will discuss whether America lost on the battlefield or the home front. People are still arguing about the war even though it finished over thirty years ago showing it is still an important issue today. It is clear that both sides have made a big impact on the outcome of the war. Like the Iraq war now, it was anunpopular guerilla war due to the amount of soldiers who lost their lives . As the Vietnam War was unpopular, the home front weren't very supportive of the soldiers. Soldiers who struggled on the battlefield unable to cope with different the environment and the use of guerilla tactics.

From when the firstcombat  troops got sent to Vietnam in 1965, the public were quite supportive. The army were somewhat arrogance and optimism, the U.S soldiers very much understated the Vietnamese abilities at this point. Although some people had pride in America's involvement in the war, there were far more people who didn't agree with the war. People who didn't agree with the war would usually went to more drastic measures to get their opinions heard, e.g. the Black Panthers, . The Black Panthers believed that black people should not be forced to fight in the military service to defend a racist government that does not protect the black community. They said they would not fight and kill other people of colour in the world who, like black people, are being victimized by the white racist government of America. Their campaign was huge throughout the black community in America- especially with the racial issues at that time. As the war went, there were more protests. When college students found out that they could be subscribed to the army due to theintroduction of the lottery, they suddenly became a lot more anti-war. They wereoutraged and shocked about the fact that they themselves could become soldiers. Mass demonstrations, often in Washington, would be completely covered by the media. This would lead to the troops at war hearing about people not wanting them to be there- they could find out through letters, radios, phone calls, any form of contact.When the troops hear about people being against them being there- They are obviously going to feel like they are wasting their time, so their morale will be completely devoured. Then with low morale this could make them weaker on the battlefield, giving the North Vietnamese an advantage.

The North Vietnamese Army had many advantages, even when the American  troops morale were high. At ease with the environment and knowing the land well, the North Vietnamese Army mastered their tactics- using the guerilla tactics. The Viet Cong's used guerilla warfare because their territory that the Americans had to fight in was so full of plants and growth, that guns and such did not work as well as tactics adapted to the environment such as booby traps and punji sticks. Vietnamese knew that hand to hand combat was the only way to successfully way to win the war as it was less money and Americans were not used to that type of warfare.

The Americans set out to win the war by working closely with the South Vietnamese. The U.S believed in using it's wealth to the maximum, using firepower, new technology, more troops. Thefirepower aspect was pretty much a waste of time and was expensive. They couldn't use their firepower in urban areas therefore couldn't kill the North Vietnamese Army as easy as they anticipated. American's didn't think throughtheirtacticsverywell. There wasmanyflaws in themwhichhelpedcontributetotheloss. WhiletheVietnamesestructuredintelligentdeadlybooby-trapscouldinflicthugedamageonyoungAmericanconscripts- U.Stroopsstrategies were all very similar, which made it easier fortheVietnamesetofigureoutwhat they were doing. The U.Sworked a lot underpressurebecausewithalot of theirtacticstheyoftenhadtokeep them undercover from the media this would obviously make everything a lot more complex. Bodycountsandtheiruseofphosphorousandnapalmbombs were the main things they wanted to keep undercover, because of the reactions from the home front. American plans weren't full proof and a lot of their own man were killed. This obviously caused a lot of uproar at home. The Vietnam War was the first televised war, so the media would show the USA what happened all the time. This meant people on the home front quickly lost support for the soldiers because they were seeing all of the horrible incidents which were meant to be secret. The media would be completely biased and make the negatives a lot worse then they were.

The U.S army tried to cover up a lot of mistakes like the Tet Offensive. While the U.S army were at their weakest agreeing to cease fire. A lot thinking there would be nothing to be bothered about on a Vietnamese holiday, the Viet Cong launched an offensive attacking almost every town and city in South Vietnam. They trapped the U.S embassy in grounds then wiped them out, where as the media claimed VC sappers seized the U.S embassy, which clearly makes the U.S look a lot weaker. The Home front at this point were worried about their troop's tactics and abilities. Many member of the public were angry at the fact the the American troops let this happen and that they didn't expect it. The mass of attacks from the Vietnamese led to many people thinking the war was unwinnable. After the U.S troops had fought hard against the Tet Offensive and had a military victory, hearing that the media reported it as a loss their lowered morale again.

When people on the home front got enrolled by lottery people of various ages and abilities went to Vietnam. Most fought in Vietnam for 1 a year and spent another year training and being at base camp. By the time they leave the army, that is when their abilities are most excelled. When college students found out they could get enlisted in the war this is when most of the mass demonstrations began. Past experiences made many veterans against the war also arriving home and being with so many people against the war. The scaring memories of the My Lai Massacre of 1968.  People were sexually abused, beaten, tortured and killed. Some of the bodies were found mutilated. When the incident became public knowledge in 1969, it prompted widespread outrage around the world. The massacre also reduced U.S. support at home for the Vietnam War. Three U.S. servicemen who made an effort to halt the massacre and protect the wounded were denounced by U.S. Congressmen, received hate mail, death threats and mutilated animals on their doorsteps.

The soldier's welfare while they were away in the army could have easily helped contribute to their withdrawal and loss of the war. They had extremely long active hours running on little food and sleep. Obviously they wouldn't be fighting to the best of their abilities. The large availability and use of drugs may have put the troops in a better mood making their morale on high, their physicality wasn't befitting as a lot of fatigue conquered the army. Often this was due to insomnia, people couldn't sleep simply because of the situation in which they were in. The U.S as the war got longer, they became more scared because they were aware of Vietnamese abilities.

The Vietnamese had a lot of advantage throughout the whole war. They were well prepared for all the problems the American's faced. They were well equipped to the jungle environment and weather. They made cunning yet deadly booby traps which the Americans would fall for. Because of their knowledge of the area, their ambushes were pretty much flawless, the U.S army were clueless beforehand, so the American's inexperience was a very big help for the Viet Cong. Also the Viet Cong were passionate about the cause and would not give it up. The U.S could not fend the Ho Chi Min trail- this supplied the North Vietnamese army with vital supplies throughout the war, including aid sent from the USSR.

The U.S lost on the battlefield due to the many advantages of the Vietnamese. Although the U.S had money, men, and power. The Vietnamese were intelligent and used their knowledge to the best of their abilities. I think though the guerilla Tactics and the troops inexperience are what really made the war a challenge for the U.S. Although their morale was brought down immensely on the home front, had they been winning on the battlefield the homefront may have supported them.