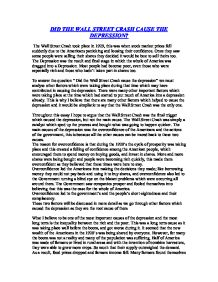 Did the Wall Street Crash cause the depression?

DID THE WALL STREET CRASH CAUSE THE DEPRESSION? The Wall Street Crash took place in 1929, this was when stock market prices fell suddenly due to the Americans panicking and loosing their confidence. Once they saw some people were selling their shares they decided it would be best to sell theirs too. The Depression was the result and final stage in which the whole of America was dragged into a Depression. Most people had become poor, even those who were especially rich and those who hadn't taken part in shares too. To answer the question " Did the Wall Street Crash cause the depression" we must analyse other factors which were taking place during that time which may have contributed in causing the depression. There were many other important factors which were taking place at the time which had started to put much of America into a depression already. This is why I believe that there are many other factors which helped to cause the depression and it would be simplistic to say that the Wall Street Crash was the only one. Throughout this essay I hope to argue that the Wall Street Crash was the final trigger which caused the depression, but not the main cause. The Wall Street Crash was simply a catalyst which sped up the process and bought what was going to happen quicker. The main causes of the depression was the overconfidence of the Americans and the actions of the government, this is because all the other causes can be traced back to these two causes. ...read more.

This meant that Americans buying foreign goods had to pay extra as there was a tax. This was good for American industries in the short term as they would have more people buying their own goods. However, the foreign countries responded the same way and put tariffs on American goods. This meant that American businessmen found it difficult to sell their manufactures abroad. At a time when Americans needed a new market, the Tariff policy became a big failure as it made overproduction worse. Soon, experienced investors realized that factories were not selling their goods and therefore not making as much profit so they started to sell their shares in these companies. Once people saw that others were selling their shares they wanted to sell their own too. Soon people were queuing up to sell their shares. This led to the Wall Street Crash. By selling shares their value had been reduced astonishingly. Without people investing in shares, companies had to shut down or reduce workforce. Overproduction was the result of overconfidence of the Government. This is because the government put tariffs as they were confident that it would only help America and nothing would go wrong. They were much to confident to expect or prepare for a depression. However, this was not the case and it was a cause of overproduction. The businessmen and factory owners were confident they would always continue to sell goods so they were not prepare for what was to come. They could have prepared by for example; introducing better versions of what they had already sold; smaller radios. ...read more.

it did not cause the Depression. The Wall Street Crash was the effect of the problems already occurring throughout America. The Wall Street Crash was the result of several long term problems in the US society and economy rather then the cause of depression. We can say this because many of the problems; action of the banks, action of the speculators all helped in causing the Wall Street Crash. However, other problems like social inequality and overproduction also played a very major part in the depression, this is because they were long term and had been taking place for a very long time already and a depression was inevitable. Maybe not as quick but just as severe. So if blaming the Wall Street Crash for the Depression is too simplistic, then who is to blame? In my opinion, the overconfidence of the government and even the Americans themselves are to blame, this is because all the causes mentioned above can be linked back to the government as I have already done. The long term factors were the most important and contributed the most in causing the depression. The Wall Street Crash on the other hand was just a small part of a Depression which already existed (as explained because of social inequality) The Wall Street Crash forced the Americans into finally seeing what was already there. The Government could have done many things to prevent the Depression but their confidence was too high, and also their no-interference policy led to Americans making decisions which the government could have prevented. They did not do this because they had too much confidence that America would always prosper and good times would be there to stay. ...read more.