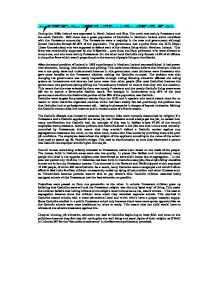 disadvantages faced by catholics in Northern Ireland in the mid-1960s

Describe the disadvantages faced by the Catholics in Northern Ireland in the mid- 1960s. During the 1960s Ireland was separated in North Ireland and Eire. The north was mainly Protestant and the south Catholic. Still there was a great population of Catholics in Northern Ireland which cohabited with the Protestant community. The Protestants were a majority in the area and government although Roman Catholics formed 35-40% of the population. The government had a police force: the RUC (Royal Ulster Constabulary) who was supposed to defend each of the citizens living within Northern Ireland. This force was occasionally supported by the B-Specials - part time, auxiliary policemen who were allowed to carry arms, and who were mainly Protestants. On the other hand Catholics only formed 14.5% of all officers in the police force which wasn't proportional to the amount of people living on the district. ...read more.

letting businesses be in danger of boycott or attacks. Making the Catholic communities live insecure and in constant alert of a future attack. The Catholic lifestyle was limited by sectarian behaviour. Jobs were normally determined by religion; if a Protestant and a Catholic applied for the same job, the Protestant would always get the job, no matter how many qualifications the Catholic had. An example of this was in Belfast where 97.5% of the council employees were protestant. Another problem that Catholics faced in the jobs was that unions were normally controlled by Protestants; this meant that they wouldn't defend a Catholic worker against any segregational treatment but could, on the other hand, make their lives harder by providing them with poor job conditions. The employers determined the religion of the applicant according to the name of the school they used to attend eg. ...read more.

Prejudices were passed on from one generation to the other. In schools Protestant children grew up believing that Catholics were evil and the Protestant religion was the only "good way" of living. This made the children believe that having a friend who's religion wasn't the same as his, wasn't correct... This lead to segregation because since the children were small they attended separate schools. This resulted in Catholics attend schools with a lower educational level and which didn't have a proper material supply. Some Catholics studied in a public Protestant school only because there were more sports opportunities as the Catholic schools were more traditional on what to study. This meant that the child would have to withstand the abusive treatment against him. Unequal housing, job allocation, education etc lead to Catholics beginning to loose faith and trust on the politicians because they felt they did nothing for the well-being and equal rights of their religion as O'Neill [a Unionist MP for the "Bannside constituency" in the Stormont parliament] promised. ...read more.