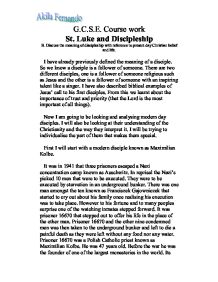 Discuss the meaning of discipleship with reference to present day Christian belief and life.

G.C.S.E. Course work St. Luke and Discipleship B. Discuss the meaning of discipleship with reference to present day Christian belief and life. I have already previously defined the meaning of a disciple. So we know a disciple is a follower of someone. There are two different disciples, one is a follower of someone religious such as Jesus and the other is a follower of someone with an inspiring talent like a singer. I have also described biblical examples of Jesus' call to his first disciples. From this we learnt about the importance of trust and priority (that the Lord is the most important of all things). Now I am going to be looking and analysing modern day disciples. I will also be looking at their understanding of the Christianity and the way they interpret it. I will be trying to individualise the part of them that makes them special. First I will start with a modern disciple known as Maximilian Kolbe. It was in 1941 that three prisoners escaped a Nazi concentration camp known as Auschwitz. In reprisal the Nazi's picked 10 men that were to be executed. They were to be executed by starvation in an underground bunker. There was one man amongst the ten known as Franciszek Gajowniczek that started to cry out about his family once realising his execution was to take place. However to his fortune and to many peoples surprise one of the watching inmates stepped forward. It was prisoner 16670 that stepped out to offer his life in the place of the other man. Prisoner 16670 and the other nine condemned men was then taken to the underground bunker and left to die a painful death as they were left without any food nor any water. ...read more.

Martin Luther King was a great example of a modern disciple. He was a man that went through a lot. He had been stabbed and yet did not retaliate as he continued to stand strong. He stood up for his race. He never believed that violence was not the way to solve injustice (like Jesus). He was a great Christian at mind. He showed the power of love and care could overcome any force. He showed that things could be resolved not just by protesting but by will and letting those that don't know realise what they have done wrong. By creating an understanding with the whites and given them a chance to be forgiven for their actions. He did not want to retaliate at all. He just wanted everyone to be equal, of all religions and all nationalities. He wanted to have a peace amongst all the races. He wanted the whites to look beyond the colour of their skin and instead look for a human being with a personality and with emotions just the way Jesus did. This is why Martin Luther king is a great disciple. Next I am going to look at another modern day disciple known as the Archbishop Desmond Tutu. A black man Desmond Tutu was awarded a Nobel Peace Prize in the year of 1984. He then in 1986 became the first black Archbishop in the whole of South Africa. Many people from all over the world came to view his receiving of the Nobel Prize. Guests such as Stevie Wonder, the archbishop of Canterbury, Coretta King, and the wife of Martin Luther King also attended ceremony. ...read more.

She put her heart and soul into her work with the people and really couldn't do anything more. She has done an outstanding achievement. She, like Jesus went out of her way to help those who needed it. All of these are examples of modern day disciples. They have all dedicated their lives to the people. There is a big difference between modern disciple's and old disciples. In the olden days they could leave everything they had and could survive on their own. Now it is almost impossible to survive on your own as it all depends on money. The modern day disciple's needed money to carry out their work. Therefore they are very much different. It is the actions of the modern day disciples that make them a disciple. Though they do not leave everything to preach the word of the Lord but they dedicate their lives to the lord sacrificing any leisure they could have. It is the fact that both modern and olden day disciple's try to follow the footsteps of Jesus the best they can that brings them to do the same duty, preach the word of the lord. None of the disciple's that I have chosen has lived very pleasant lives but they know that their purpose is special in its own way. It is their work that makes them happy and proud. Their work is admirable as well as inspirational. It takes a lot of courage and bravery as well as dedication to be a disciple. They sacrificed their own lives for the lord and his people. These are the sources of which I have taken my facts from: Contemporary Moral Issues-Joe Jenkins Heinemann Educational Books A Time to Live-The New Christian Way-Maura Hyland Veritas The Christian Experience-Living Faith-Michael Keene Stanley Thornes Ltd. By Akila Fernando ...read more.