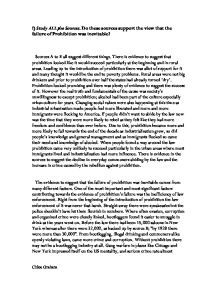 Do these sources support the view that the failure of Prohibition was inevitable?

f) Study ALL the Sources. Do these sources support the view that the failure of Prohibition was inevitable? Sources A to E all suggest different things. There is evidence to suggest that prohibition looked like it would succeed particularly at the beginning and in rural areas. Leading up to the introduction of prohibition there was allot of support for it and many thought it would be the end to poverty problems. Rural areas were not big drinkers and prior to prohibition over half the states had already turned 'dry'. Prohibition looked promising and there was plenty of evidence to suggest the success of it. However the real truth and fundamentals of the cause was society's unwillingness to except prohibition; alcohol had been part of the culture especially urban culture for years. Changing social values were also happening at this time as industrial urbanization made people feel more liberated and more and more immigrants were flocking to America. If people didn't want to abide by the law now was the time that they were more likely to rebel as they felt like they had more freedom and confidence than ever before. Due to this, prohibition became more and more likely to fail towards the end of the decade as industrialization grew, so did people's knowledge and general management and as immigrants flocked so came their need and knowledge of alcohol. When people found a way around the law prohibition came very unlikely to succeed particularly in the urban areas where most immigrants lived and industrialization had more influence. ...read more.

Source E also agrees that "a vast army of lawbreakers have appeared", and then goes on further to say "respect for the law has been greatly lessened" emphasising on people's unwillingness to except this new law. Although this does appear to be very true this evidence is not entirely reliable as Rockefeller was trying to justify his reasons for his change in opinion of prohibition. He also was based in a large city where drinking was more available and on a greater demand than rural parts of America. A final determination for the inevitable failure of prohibition was that the law was going against the daily habits and customs of Americans. Due to a large scale flock of immigrants to America in the last 50 years, to many people like the Jews and the n***o population, drinking was not a sign of moral weakness but part of their culture and way of living. The influx of immigrants meant a growth in cities and in 1920 a census revealed that the USA was predominantly urban for the first time. This resulted in the tension between the rural and the urban states. The saloon was at it's greatest in cities with support from the Catholics and immigrants meant it had a great influence even if widening the divided between catholic and protestant, immigrant and native and the urban and rural states. Source B supports this in the sense that drinking was taking place mainly in cities; "by 1928 there was more than 30,000 'speakeasies' in New York", the source also mentions that made illegal drinking possible simply "supply a public demand". ...read more.

It would be hard to say whether prohibitions failure was inevitable as both arguments have their strengths. Prohibition looked promising prior to its introduction and certainly in the rural areas of America as over 50% of the states had gone 'dry' before anyway. However it was not taken into account of how the growing urban areas would take the new law. Social values were changing with the kick off of the roaring twenties as the liberation of women, new immigration and industrial urbanisation channelled Americans into the confidence of their newly found buoyancy. Perhaps prohibition would have succeeded if these traditional values had not been obscured, because all of the discussed issues are symptomatic of the fundamental cause being the change in Americans attitude and unwillingness to accept this law. However, because of this prohibitions failure only became obvious after the initial stage of prohibition, therefore not making it inevitable from the beginning. The 18th amendment did become inevitable to failure within the first few years of prohibition and certainly after 1925, as the law just was not being enforced and other crimes and an attitude of lawlessness has spun off it. Many US cities became more drunken, violent and corrupt than ever before, worsening the problems prohibition was supposed to solve. Prohibition may not have been inevitable to fail right from its launch, but after the first few years it was clear that it certainly would fail in the urbanised states of America. ?? ?? ?? ?? Chloe Graham ...read more.