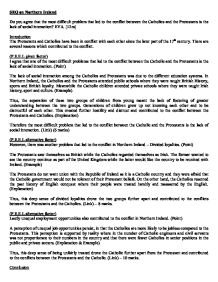 Do you agree that the most difficult problem that led to the conflict between the Catholics and the Protestants is the lack of social interaction?

(Explanation) Therefore the most difficult problem that led to the conflict between the Catholic and the Protestants is the lack of social interaction. (Link) (6 marks) (P.E.E.L alternative factor) However, there was another problem that led to the conflict in Northern Ireland - Divided loyalties. (Point) The Protestants saw themselves as British while the Catholics regarded themselves as Irish. The former wanted to see the country continue as part of the United Kingdom while the latter would like the country to be reunited with Ireland. (Example) The Protestants do not want union with the Republic of Ireland as it is a Catholic country and they were afraid that the Catholic government would not be tolerant of their Protestant beliefs. ...read more.

(Explanation & Example) Thus, this deep sense of being unfairly treated drove the Catholic further apart from the Protestant and contributed to the conflicts between the Protestants and the Catholic. (Link) - 10 marks. Conclusion In my opinion, I agreed that the most difficult problem that led to the conflict between the Catholics and the Protestants is lack of social interaction. If there were social interaction from young, the problem of divided loyalties will be overcome through time when the people in Northern Ireland will grow to respect and love each other. Then the problem of being unfairly treated will be solved and equal opportunity for jobs will be provided for both Catholic and Protestant. ...read more.