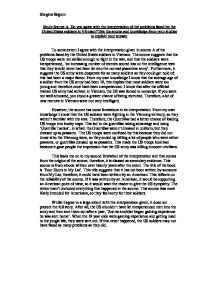 Do you agree with the interpretation of the problems faced by the United States soldiers in Vietnam? Use the source and knowledge from your studies to explain your answer

From my own knowledge I know that the US soldiers were fighting in the Vietcong territory, so they weren't familiar with the area. Therefore, the Guerrillas had a better chance of leading US troops into booby traps. This led to the guerrillas taking advantage and using 'Guerrilla Tactics', in which the Guerrillas weren't dressed in uniform, but they dressed up as peasants. The US troops were confused by this because they did not know who the Vietcong were, so they ended up killing a lot of people who were either peasants, or guerrillas dressed up as peasants. This made the US troops look bad because it gave people the impression that the US army was killing innocent civilians. ...read more.

This reflects on the reliability of the source. If it was written by an American, it would be supporting an American point of view, so it would want the reader to give the US sympathy. The writer hasn't included everything that happened in the source. This source was most likely intended for Americans, so they feel sorry for their soldiers. Whilst I agree to a large extent with the interpretation given, it does not present the full story. After all, the US shouldn't have let inexperienced men into the army and then sent them out after a year, 'Just as a soldier began gaining experience he was sent home'. When the 19 year olds were gaining experience and getting used to the jungle life, they were sent out. If this never happened, the US soldiers may not have faced as many problems as they did. Shegina Begum ...read more.