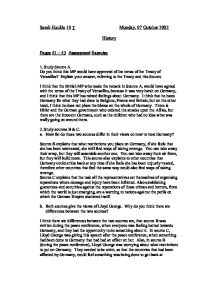 Do you think this MP would have approved of the terms of the Treaty of Versailles? Explain your answer, referring to the Treaty and this Source.

Sarah Huckle 10 ? Monday, 07 October 2002 History Pages 41 - 43 Assessment Exercise 1. Study Source A. Do you think this MP would have approved of the terms of the Treaty of Versailles? Explain your answer, referring to the Treaty and this Source. I think that the British MP who made the remark in Source A, would have agreed with the terms of the Treaty of Versailles, because it was very harsh on Germany, and I think that this MP has mixed feelings about Germany. I think that he hates Germany for what they had done to Belgium, France and Britain, but on the other hand, I think he does not place the blame on the whole of Germany. There is Hitler and the German government who ordered the attacks upon the Allies, but there are the innocent Germans, such as the children who had no idea what was really going on around them. 2. Study sources B & C. a. How far do these two sources differ in their views on how to treat Germany? Source B explains that what restrictions you place on Germany, if she feels that she has been mistreated, she will find ways of taking revenge. You can take away their army, but they will assemble another one. ...read more.

If that had happened then the Allies would not have got reparations payments, and although the Allies would find a way of getting the money for the rebuilding of their countries, this defeated the object of taking revenge on Germany. 4.Study Source E. How far does this source show that Wilson failed at the Paris peace conference? Explain your answer. I think that this source shows, that Wilson feels that they have done as much as they can, and now it is up to the gods to decide their fate. He says that 'as no-one is happy, we have a just peace'. I think he is saying, that if one person, got everything they wanted then although that person may be happy, the other people may not, because they may have disagreed with what that person was saying. None of the victors got the peace they wanted, not least because they all wanted a different kind of peace. However, even when the nations first assembled in Paris, they were not free to shape the peace as they wished. Wilson was one of the victors who did not get everything they wanted. Not all his 'fourteen points were debated by the representatives from each country, so he felt that he was not satisfied with the outcome of the treaty. ...read more.

The treaty was an attempt to make sure this sort thing didn't happen again. They resolved this by disarming and punishing the alleged aggressors. But it was only an armistice for fifteen years, and when the fifteen years was up there was the possibility of revenge. It also showed the world that if anyone tried to take over another land and destroy its freedom, democracy and human rights, they couldn't get away with it, and should expect to pay. It was easy to see it as justified from the Allies side, but there were the ordinary people of Germany to consider. Whilst it was easy to feel the military and financial restrictions were justified at the time, by today's standards it appears rather short sighted and harsh, for example: the devaluation of the German economy caused by the German government, printing huge amounts of worthless bank notes to pay off reparations, had a devastating effect on the lives of ordinary men, women and children. Whilst the terms may seem harsh to us today, I am quite sure that people living at the time, who experienced terrible loss and devastation would feel it was more than justified, against what they must have seen to be a totally evil and hostile race. ...read more.