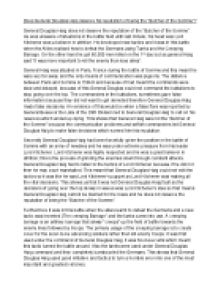 Does General Douglas Haig deserve his reputation of being the Butcher of the Somme?

﻿Does General Douglas Haig deserve his reputation of being the ?Butcher of the Somme?? General Douglas Haig does not deserve the reputation of the ?Butcher of the Somme?. He was unaware of situations in the battle field until last minute; his head was Lord Kitchener was a believer in attrition. He developed new tactics and it was in this battle when the Allies realised how to defeat the Germans using Tanks and the Creeping Barrage. On the other hand he got 60,000 men killed on the 1st day but as general Haig said ?It was more important to kill the enemy than lose allies?. General Haig was situated in Paris, France during the battle of Somme and this meant he was very far away and the only means of communication was pigeons. The distance between Paris and Somme is 150km and because of had meant the commands were slow and delayed; because of this General Douglas could not command the battalions to stop going over the top. ...read more.

This shows us that it was not General Douglas Haig fault as the decisions of going over the top slowly in waves was Lord Kitchener?s idea so that means General Douglas Haig cannot be blamed for the loses and he does not deserve the reputation of being the ?Butcher of the Somme?. Furthermore it was in this battle when the allies learnt to defeat the Germans and a new tactic was invented (The creeping Barrage? and the tanks came into use. A creeping barrage is an artillery barrage that slowly "creeps" up the field of battle towards the enemy lines followed by troops. The primary usage of the creeping barrage is to create cover for the soon-to-be advancing soldiers rather than kill enemy troops. It was first used under the command of General Douglas Haig; it was his clever wits which meant this tactic turned the battle around. Also the tanks were used under General Douglas Haig command and they completely bamboozled the Germans. This shows that General Douglas Haig used good initiative and tactics to turn a horrible error into one of the most important and greatest victories. ...read more.

His caring for reputation had led over 100,000 men to their deaths. He did not change his battle plan until he was ordered to by Lord Kitchener but by then over 120,000 men were dead. Others believe that his inflexibility was Lord Kitchener?s plan of attrition and he could not help it but there is not sufficient evidence to support that. This is why he deserves his reputation of being ?Butcher of the Somme? because his inflexibility and him caring too much for his reputation led him to lead lots of men to deaths. In conclusion he was not the ?Butcher of the Somme? because he led the allied forces to victory under pressure. The most important fact is that it was in this battle when the allies learnt to fight the Germans and this was vital because this worked throughout the World War. Key facts were General Douglas Haig was always under pressure from Lord Kitchener and it was not his plan to grind the enemy down. His faults of being selfish and using bad tactics are minor against his positive and this is why General Douglas Haig does not deserve his reputation of being the ?Butcher of the Somme? ...read more.