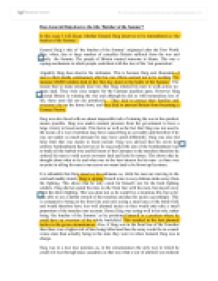 Does General Haig deserve the title Butcher of the Somme?

Does General Haig deserve the title 'Butcher of the Somme'? In this essay I will discus whether General Haig deserves to be remembered as 'the butcher of the Somme'. General Haig's title of 'the butcher of the Somme' originated after the First World War, when, due to large number of casualties Britain suffered from the war and mostly the Somme. The people of Britain wanted someone to blame. This was a coping mechanism in which people could deal with the loss of the 'lost generation'. Arguably Haig does deserve his nickname. This is because Haig sent thousands of men to their deaths continuously after his war efforts seemed not to be working. For instance 60,000 soldiers died in the first day alone in the battle of the Somme. The reason that so many people died was that Haig ordered his men to walk across no-mans land. They were easy targets for the German machine guns. ...read more.

therefore he ordered his men to walk across no-mans land and look for mines. This shows that he thought about what to do and what was in the best interest for his men as there was no point in telling his men to run across no-mans land to be blown up by mines. It is debatable that Haig deserves his nickname as, while his men are starving in the cold and muddy trench, Haig is sipping French wine in cosy ch�teau miles away from the fighting. This shows that he only cared for himself, not for the hard fighting soldiers. Haig did not spend his time on the front line with his men, but stayed away from the direct fighting. This was done not so he could live a luxurious life, but so he was able to see a further stretch of the trenches and plan his tactics accordingly. This is compared to being on the front line and only seeing a small area of the battle field and would therefore have less well planned tactics as they would only take a small proportion of the trenches into account. ...read more.

Therefore either way Haig would be considered a 'butcher'. In conclusion I believe that Haig does not deserve his title of 'the butcher of the Somme'. If the objective for a general to be successful is to win wars, then Haig must be judged as a success. Yes he sent thousands of men to their deaths, however in a war of attrition and with the limited amount of military tactics available that was the only way to win. There would always be a scapegoat for the death tolls of The Great War and are we forgetting that Haig was ordered by the government to get a large scale win? Therefore it is perfect for the government; if Haig is successful they can win the war. They also have someone to blame after the war is over thus making the public hold Haig responsible for the deaths tolls not the government. Perhaps Haig could be viewed, much like the soldiers he sent over the top as a puppet of the government. Therefore Haig does not deserve the title 'the butcher of the Somme'. ...read more.

Overall, this is an excellent response that answers the question well and is focused throughout. The author does well to support points with concise evidence but also ensures that both sides of the debate are considered before reaching a conclusion. The introduction is the weakest area and could have included a line of argument. 5 stars.