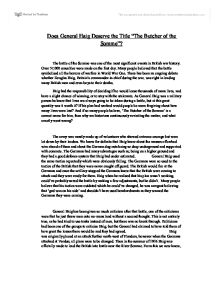 Does General Haig Deserve the Title The Butcher of the Somme?

Does General Haig Deserve the Title "The Butcher of the Somme"? The battle of the Somme was one of the most significant events in British war history. Over 57,000 casualties were made on the first day. Many people believed that the battle symbolised all the horrors of warfare in World War One. There has been an ongoing debate whether Douglas Haig, Britain's commander-in-chief during the war, was right in leading many British men and even boys to their deaths. Haig had the responsibility of deciding if he would loose thousands of mens lives, and have a slight chance of winning, or to stay with the stalemate. As General Haig was a military person he knew that lives are always going to be taken during a battle, but at this great quantity was it worth it? ...read more.

Haig when he realised that his plan wasn't working, could've probably saved the battle by making a few adjustments, but he didn't. Many people believe that his tactics were outdated which he could've changed, he was arrogant believing that 'god was on his side' and shouldn't have used bombardments as they warned the Germans they were coming. General Haig has been given so much criticism after that battle, one of the criticisms were that he just threw men onto no-mans land without a second thought. This is not entirely true, as he had tried to use tanks instead of men, but there was no break through. Politicians had been one of the groups to criticise Haig, but the General had claimed to have told them of how great the losses there would be and they had agreed. ...read more.

But the real question is was this all worth loosing thousands of lives and could the same results have been achieved without the enormous human sacrifice. It is easy now to look back and think that there must have been a better way to have dealt with the situation, but at the time it would have not been easy to have come up with a alternative solution. We must judge General Haig with this in mind, but even back then there must've been some other way to have fought the battle without such a great loss. I believe that what happened in the summer of 1916 was wrong and could've been solved in a different way, but the title "Butcher of the Somme" is probably too harsh for General Haig as it is judging him by todays, knowledge and understanding. However, this is an argument that will go on continuously in history, and everyone will have different opinions. ...read more.