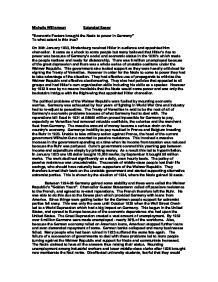 &quot;Economic Factors brought the Nazis to power in Germany&quot; To what extent is this true?

Michelle Williamson Extended Essay "Economic Factors brought the Nazis to power in Germany" To what extent is this true? On 30th January 1933, Hindenburg received Hitler in audience and appointed him chancellor. It came as a shock to some people but many believed that Hitler's rise to power was because of Germany's social and economic status in the 1930's which made the people restless and ready for dictatorship. There was 6 million unemployed because of the great depression and there was a whole series of unstable coalitons under the Weimar Republic. This government also lacked support as they were heavily criticised for signing the Treaty of Versailles. However in order for the Nazis to come to power they had to take advantage of the situation. They had effective use of propaganda to criticise the Weimar Republc and effective electioneering. They also had policies that appealed to all groups and had Hitler's own organisation skills including his skills as a speaker. However by 1932 it was by no means inevitable that the Nazis would come power and was only the backstairs intrigue with the Right-wing that appointed Hitler chancellor. ...read more.

The Nazis claimed to have all the answers thus raising their status. Mounting unemployment among industrial workers and lower middle-class clerks after 1928 brought new membersto the Nazi ranks. Disaffected university students, fearful that they would not find jobs upon graduation or would be displaced by Jewish professionals generated support for the NSDAP. And many first time voters were attracted to this radical protest party because it seemed to offer a different approach than the failed liberal or leftist parties. However, apart from the economic problems, the Weimar Republic suffered from other problems. The German people became vulnerable to the appeal of the Nazis because of the weak Weimar Republic. It was imposed on the German people by Hindenburg and Ludendorf (who wanted to shift the blame for the loss of the war); it was born out of defeat. Therefore from the beginning, the government which came to power in 1918 lacked any "grass root support". This was shown by the impact of the Spartacus Revolt which alienated the left wing from the right forever and Kapp Putsch highlighted its lack of support as its own army supported it and there was a general strike in Berlin. ...read more.

Papen thought he could tame Hitler by tying him down with the responsibiltitesof government and transferring to himself his tremendous popularity. "No danger at all. We've hired him for our act." - Franz Von Papen But he proved no match for Hitler's ruthlessness and his genuis at knowing how and when to seize power. The burning of the Reichstag was fortunate for the Nazis. It allowed them to arrest Communist Mp's thus eliminating his oppositon. The enabling act therefore put Hitler into complete power of Germany. He had total dictatorial control over Germany within two months of becoming Chancellor. Looking at all the conclusive facts and arguments, the conclusion that can be reached is that Hitler came to power due to a combination of many different factors. However, the backbone of Hitler's rise was based on the great economic instability of the time highlighted by the two crisis in 1923 and 1929, which enabled Hitler to exploit the situation. Then Hitlers policies appealed to everyone due to effective propaganda. Secondly, the problems with constitution (article 48) which undermined German democracy and the weakness of the Weimar Republic that was widely hated helped the Nazis. This was because of their lack of suppoert and weak constitution. However in the end it was only political intrigue in the right-wing that brought him into office. ...read more.