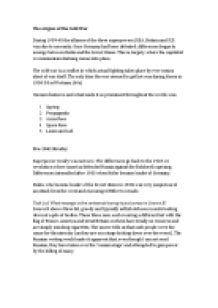 ﻿The origins of the Cold War During 1939-45 the alliance of the three superpowers (USA, Britain and SU) was due to necessity. Once Germany had been defeated, differences began to emerge between Stalin and the Soviet Union. This is, largely, where the capitalist vs communism shebang comes into place. The cold war is a conflict in which actual fighting takes place by ever means short of war itself. The only time the war seemed to get hot was during Korea in 1950-53 ad Vietnam (60s) Its main features, and what made it so prominent throughout the world, was: 1. Spying 2. Propaganda 3. Arms Race 4. Space Race 5. Loans and Aid Pre-1941 Rivalry Superpower rivalry was not new. The differences go back to the 1918-21 revolution where America defended Russia against the Bolshevik uprising. Differences intensified after 1933 when Hitler became leader of Germany. Stalin, who became leader of the Soviet Union in 1928, was very suspicious of an attack from the west and encouraged Hitler to invade. Task 1a) What message is the cartoonist trying to put across in Source B? Source B shows three fat, greedy and typically selfish old men in suits looking down at a pile of bodies. These three men, each wearing a different hat with the flag of France, America and Great Britain on them have totally no remorse and are simply smoking cigarettes. The source tells us that such people were the cause for this atrocity (as they are on a stage looking down over the event). The Russian writing would make it apparent that, even though I can not read Russian, they have taken over the ?russian stage? and attempted to gain power by the killing of many. Conferences Tehran ? November 1943 Yalta - Feb 1945 Potsdam ? July 1945 Britain and USA to open up a second front by invading France in 1944 The Soviet Union would enter the war against Japan when Germany Surrendered To divide Germany and Berlin as previously agreed. ...read more.

Economic crisis in East Germany slowly evaporated. Although Khrushchev failed to remove Western forces the crisis ended and tension in Europe eased. Khrushchev saw this as a major success as the flow of refugees stopped and economic crisis eased in East Berlin. The wall was ?guarding the gates of socialist paradise.? The western forces were not removed by the crisis ended and tensions eased. The wall became a symbol of division and a sign that Berlin was reigned by foreign nations. When Kennedy visited Berlin in 1963 he made several speeches ? In Berlin he accidently said ?I am a donut? instead of ?I am a Berliner? in German. He did make clear the wall was ?most obvious demonstration of communism?s failures?. Cuba Took places over a few days in 1962 brought the superpowers to brink of nuclear war. USA had supported Cuba since 1959 with Batista until a revolution brought Fidel Castro to power. Castro rejected all US productions and, in return, Cuban sugar was banned. The soviet Union seized opportunity and saw this as a way to spread communism into the Caribbean as well. Khruschev, the leader of the Soviet Union, was keen to challenge the USA but could not reunite Berlin. Bay Of Pigs USA Broke off diplomatic relations in January 1961. Before the end of Eisenhower?s presidency he sanctioned a scheme under which Cuban Exiles living in the USA would be trained in preparation for an invasion of Cuba. Kennedy, in 1961, accepted this Scheme. The exiles from 1959 (when Castro took control) planned to execute the plan. They were fully equipped exiles who would land in Cuba and remove Castro. America believed Castro was unpopular. Trained in America (florida) and Guatemala the whole operation was underfunded and only had $45million to run. La Brigada had 1,500 people. Date Event 1961 15 April US planes bombed part of the Cuban airforce in order to weaken them 16 April Planned second wave of bombings called off. ...read more.

This was totally different to the cold and uncooperative leaders at the start of the war. In the May 1989 summit in Moscow Gorbachev promised to reduce arms further and take soldiers out of Afghanistan. This showed real promise. The CFE (Conventional Armed Forces in Europe Treaty) signed by Nato and Warsaw Pact led to a reduction in tanks, missiles, aircrafts and non-nuclear missile technology. When Saddam Hssein invaded Kuwait in 1990 the two superpowers were closely tied in acting against him. ________________ Start talks 1990-1991 Bush and Gorbachev discussed, over a four day summit, that START talks and finally signed START I on July 31st 1991. In seven years the two would have to reduce strategic nuclear forces to: 1. 1600 strategic nuclear delivery vehicles 2. 6000 warheads 3. 4900 ballistic missiles 4. This was a 25-35% reduction on all warheads. They signed pens with metal made from scrap missiles. ________________ Dismantling of the wall East and West Germany had demonstrations and called for a change in government. Gorbachev visited East Germany in October 1989 and informed political leaders that the Soviet Union would not be involved in internal affairs. 9th November East Germany announced the opening of the border between them and West Germany. People began to dismantle the wall. In the next few days over 1 million people travelled to and from East Germany to West to see relatives. 3rd October 1990 they were officially reunited. The Warsaw Pact and NATO were dissolved. Collapse of the Soviet Union In 1990 many states declared themselves independent and, accepted by Moscow, which caused real fears for the protection and economic safety of the Soviet Union. Gorbachev was hated and lost authority within the power. December 1991 he resigned and the Soviet Union split into several states. Gorbachev won the Nobel peace price in 1990 and his polices had evaded nuclear war. The INF treaty was still important and troops removed from Afghan, allowing human rights and glasnost ended the cold war. ...read more.