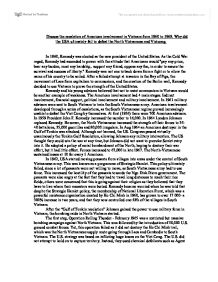 Escalation of American involvement in Vietnam

Discuss the escalation of American involvement in Vietnam from 1960 to 1968. Why did the USA ultimately fail to defeat the North Vietnamese and Vietcong. In 1960, Kennedy was elected as the new president of the United States. As the Cold War raged, Kennedy had ascended to power with the attitude that Americans would "pay any price, bear any burden, meet any hardship, support any friend, oppose any foe, in order to assure the survival and success of liberty." Kennedy was not one to back down from a fight or to allow the name of his country to be soiled. After a failed attempt at invasion in the Bay of Pigs, the movement of Laos from capitalism to communism, and the creation of the Berlin wall, Kennedy decided to use Vietnam to prove the strength of the United States. Kennedy and his young advisers believed that not to resist communism in Vietnam would be another example of weakness. The American involvement had 4 main stages: Indirect involvement, financial support, political involvement and military involvement. In 1961 military advisers were sent to South Vietnam to train the South Vietnamese army. American involvement developed through a series of escalations, as the South Vietnamese regime proved increasingly unable to defeat the Viet Cong by themselves. ...read more.

When the French exited Vietnam by 1954, the U.S. was quick to step in to begin taking control of South Vietnam. As an excuse to justify American intervention in Vietnam, President Dwight D. Eisenhower introduced the Domino Theory. This theory explained that if South Vietnam fell to communism, this would result in all of Southeast Asia doing the same. As we know now, the Domino Theory turned out to be false and inaccurate. The U.S. government also feared that the eventual spread of communism could potentially lead to the United States and influence Americans. USA thought that if they help South Vietnamese, it would help to defeat communist North Vietnam. They chose Ngo Dinh Diem to be president of South Vietnam. However, choosing Diem as the ruler was one of the biggest mistakes made. His religious persecution against Buddhists, who were the majority of civilians, quickly alienated the population. A devout Catholic, Diem's self-righteous outlook caused him to do more harm than good. His destruction of several ancestral graves of Buddhist enemies, for example, ignited the flame for mistrust in the government and only furthered the Vietnamese view of Americans as selfish imperialists. ...read more.

The government did not stop the showing of images of the war to the people USA, yet this led to the creation of anti-war movements. A lot of people started to doubt the tactics of US in Vietnam. As more dead bodies came back to US, people stopped believing that US has a chance to win this war. People were worried, that it's not worth sacrificing so much for a small, unknown country like Vietnam. The soldiers that came back from Vietnam felt guilty about the damage they did and the number of people they had to kill. US government was under the pressure from people, yet couldn't do anything to stop the war quickly. It failed to further keep the reasons for US intervention justified. The US involvement in Vietnam grew between 1961 and 1968 through military involvement and the increasing number of troops that were sent to Vietnam. Despite the technology and size of army that US had, they lost the war for a number of reasons. US was using wrong tactics, soldiers were not prepared to fight in the jungle, supply routes were too long and eventually there was a strong opposition to war in USA. US troops fought against an enemy that simply refused to lose. ...read more.