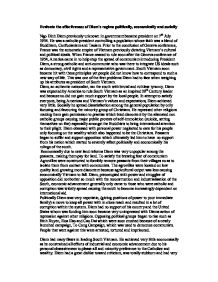 Evaluate the effectiveness of Diem's regime politically, economically and socially

Evaluate the effectiveness of Diem's regime politically, economically and socially Ngo Dinh Diem previously unknown in government became president on 7th July 1954. He was a catholic president controlling a population whose faith was a blend of Buddhism, Confucianism and Taoism. Prior to the conclusion of Geneva conference, France was the autocratic empire of Vietnam previously dictating Vietnam's cultural and political ideals. When France ceased to rule soon after the Geneva conference of 1954, America came in to help stop the spread of communism introducing President Diem, a strong catholic and anti-communist who was there to integrate US ideals such as democracy, civil rights and a representative government. South Vietnam soon became hit with these principles yet people did not know how to correspond to such a new way of life. ...read more.

Diem obsessed with personal power neglected to care for his people only focusing on the wealthy which also happened to be the Christians. Peasants began to suffer and support opposition which ultimately led him to have no support from his nation which started to severely affect politically and economically his rulings of the south. Economically due to new land reforms Diem was very unpopular among the peasants, making them pay for land. To satisfy the brewing fear of communism Agrovilles were constructed to forcibly remove peasants from their villages so as to isolate them from contact with communists. The agrovilles were located on low quality land growing more discontent because agricultural output was less causing economically Vietnam to fall. ...read more.

Diem had many flaws in leading South Vietnam. He achieved very little economically as he constrained all efforts of industrial and economic advancement due to his personal obsessiveness to please all and minority preference to the Catholics and wealthy. Diem had a great dislike toward criticism, was totally stubborn and had very little public support. He relied on his immediate family for strength and turned a blind eye to many corrupt activities that his family members implemented. Insensitive to the majority population of Buddhists, Diem to keep control introduced fear and censorship all round, enemies were severely crushed yet the conduct of the Army was poorly trained and led. Due to his leading the South became increasingly dependant on international aid and Diem's overall regime of leadership was based on corruption and a general spreading of discontentment which in the end led to resistance from the majority population. Ultimatley Diem promised much, delivered little and raised fear. ...read more.