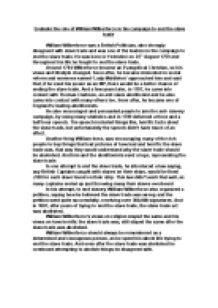 He also encouraged and persuaded people to join the anti- slavery campaign, by using many statistics and in 1789 delivered a three and a half hour speech. The speech included things like, horrific facts about the slave trade, but unfortunately the speech didn?t have much of an effect. Another thing William done, was encouraging many of the rich people to buy things that had pictures of how bad and horrific the slave trade was, that way they would understand why the slave trade should be abolished. ...read more.