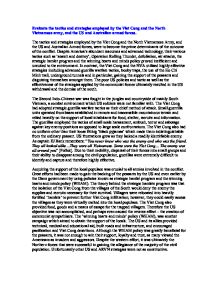 Evaluate the tactics and strategies employed by the Viet Cong and the North Vietnamese army, and the USand Australian armed forces.

The most infamous of these was napalm, a mixture of petrol and a chemical thickener which produces a tough sticky gel that attaches itself to the skin. The igniting agent, white phosphorus, continues burning for a considerable amount of time. A reported three quarters of all napalm victims in Vietnam were burned through to the muscle and bone. The pain caused by the burning is so traumatic that it often causes death. The US also made considerable use of anti-personal cluster bombs, particularly in populated areas. The bombs contained hundreds of pellets which burst out at extremely high velocities, ripping open the body of anyone within range. The bombing and shelling of Operation Rolling Thunder was horrifically devastating in terms of casualties, however it did little to weaken the northern advance as well as the morale and determination of the communist forces. As one North Vietnamese citizen comments, "The Americans thought that the more bombs they dropped, the quicker we would fall to our knees and surrender. But the Bombs heightened rather than dampened our spirit" [Wood]. Although the Americans had superior technology and weaponry, it was the superiority of the communists' tactics and strategies that won them the war. The Ho Chi Minh trail, running parallel to South Vietnam through Laos and Cambodia, was the lifeline of the Viet Cong-NVA alliance. ...read more.

The Australian troops serving in Vietnam were more familiar jungle and guerilla warfare than the Americans, having learned techniques in prior experiences in Borneo and Malaya. As a Vietnamese man, Trinh Duc recalls, "The Australians were more patient than the Americans, better guerrilla fighters, better at ambushes" [Harpur]. Australian soldiers were chiefly involved in training the ARVN, 'search and destroy' missions and aggressive patrolling. The tactics employed by the Australian forces included searching for enemies and their resources, utilising common guerilla warfare techniques, interrogating suspects, uncovering underground tunnel networks and destroying key enemy bases. Units consisted of tight-knit groups of young men who had higher levels of discipline and morale than the Americans as well as a strong sense of comradeship and camaraderie. The vast array of tactics employed by the US and the South Vietnamese Army as well as the military strategies and schemes of the Viet Minh and the North Vietnamese were essentially the decisive factors of Second Indo-Chinese conflict. America's ultimate firepower, helicopters and various tactics, including strategic hamlets program, WHAM, Operation Rolling Thunder, 'search and destroy' and defoliation were mostly operated in enormous scales, yet they were unsuccessful in crushing the communist advance. On the other hand, the strategies used by the Viet Cong and the Northern forces were of great sophistication and proved to be most effective in terms of demising the South. After centuries of struggle and conflict, the tenacious Vietnamese had at last gained the promising possibility of a peaceful and liberated Vietnam. ...read more.