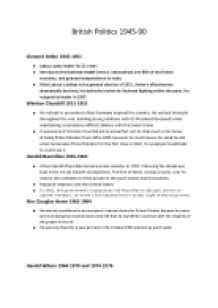 Evaluating the Prime Ministers of the 20th Century. Major figures and events in the fight for Civil Rights in the USA

﻿British Politics 1945-90 Clement Attlee 1945-1951 1. Labour party leader for 20 years 2. Introduced the National Health Service, nationalised one fifth of the British economy, and granted independence to India. 3. After Labour's defeat in the general election of 1951, Attlee's effectiveness dramatically declined, his authority broken by factional fighting within the party. He resigned as leader in 1955 Winston Churchill 1951-1955 1. His refusal to surrender to Nazi Germany inspired the country. He worked tirelessly throughout the war, building strong relations with US President Roosevelt while maintaining a sometimes difficult alliance with the Soviet Union. 2. It seemed as if Winston Churchill did in actual fact not do that much in his times of being Prime Minister from 1951-1955 however he most known for what he did when he became Prime Minister for the first time in 1940, for example his attitude to world war 2. Harold Macmillan 1955-1963 1. When Harold Macmillan became prime minister in 1957, following the disastrous Suez Crisis, he set himself six objectives. The first of these, his top priority, was "to restore the confidence of the people in the government and themselves. 2. Repaired relations with the United States. 3. In 1962, the government's unpopularity led Macmillan to abruptly dismiss six cabinet members, an event which became known as the 'night of the long knives'. ...read more.

In 1963, King led mass protests against discriminatory practices in Birmingham, Alabama where the white population were violently resisting desegregation. The city was dubbed 'Bombingham' as attacks against civil rights protesters increased, and King was arrested and jailed for his part in the protests. 3. After his release, King participated in the enormous civil rights march on Washington in August 1963, and delivered his famous 'I have a dream' speech, predicting a day when the promise of freedom and equality for all would become a reality in America. In 1964, he was awarded the Nobel Peace Prize. In 1965, he led a campaign to register blacks to vote. The same year the US Congress passed the Voting Rights Act outlawing the discriminatory practices that had barred blacks from voting in the south. 4. As the civil rights movement became increasingly radicalised, King found that his message of peaceful protest was not shared by many in the younger generation. King began to protest against the Vietnam war and poverty levels in the US. He was assassinated on 4 April 1968 during a visit to Memphis, Tennessee. Malcolm X 1. He was an African-American Muslim minister, public speaker, and human rights activist. To his admirers, he was a courageous advocate for the rights of African Americans, a man who indicted white America in the harshest terms for its crimes against black Americans. ...read more.

2. Despite sometimes violent reaction to the sit-ins, these demonstrations eventually led to positive results. For example, the sit-ins received significant media and government attention. When the Woolworth's sit-in began, the Greensboro newspaper published daily articles on the growth and impact of the demonstration. The sit-ins made headlines in other cities as well, as the demonstrations spread throughout the Southern states. Freedom Rides 1. In the first few days, the riders encountered only minor hostility, but in the second week the riders were severely beaten. Outside Anniston, Alabama, one of their buses was burned, and in Birmingham several dozen whites attacked the riders only two blocks from the sheriff's office. 2. The riders continued to Mississippi, where they endured further brutality and jail terms but generated more publicity and inspired dozens more Freedom Rides. By the end of the summer, the protests had spread to train stations and airports across the South, and in November, the Interstate Commerce Commission issued rules prohibiting segregated transportation facilities. Birmingham 1963 1. It was a KKK stronghold and King described it as America?s worst city for racism. City businessmen actually believed that racism held back the city but their voices were usually quiet. In recent years, the KKK had castrated an African American; pressured the city to ban a book from book stores as it contained pictures of black and white rabbits and wanted black music banned on radio stations. Joshua White. ...read more.