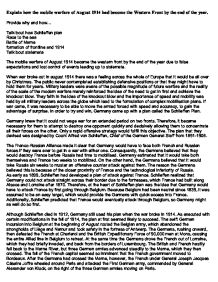 Explain how the mobile warfare of August 1914 had become the Western Front by the end of the year.

Explain how the mobile warfare of August 1914 had become the Western Front by the end of the year. Provide why and how... Talk bout how Schlieffen plan Race to the sea Battle of Marne formation of frontline and 1914 Talk bout stalemate The mobile warfare of August 1914 became the western front by the end of the year due to false expectations and lost control of events leading up to stalemate. When war broke out in august 1914 there was a feeling across the whole of Europe that it would be all over by Christmas. The public never contemplated establishing defensive positions or that they might have to hold them for years. Military leaders were aware of the possible magnitude of future warfare and the reality of the scale of the modern warfare merely reinforced the idea of the need to get in first and achieve the knockout blow. They faith in the idea of the knockout blow and the importance of speed and mobility was held by all military leaders across the globe which lead to the formulation of complex mobilisation plans. ...read more.

The reason the Germans believed this is because of the closer proximity of France and the technological inferiority of Russia. As early as 1899, Schlieffen had developed a plan of attack against France. Schlieffen realized that Germany could not attack straight across their border due to the fortresses, which France had built along Alsace and Lorraine after 1870. Therefore, at the heart of Schlieffen plan was the idea that Germany would have to attack France by first going through Belgium. Because Belgium had been neutral since 1839, it was assumed to be an easy target, which would provide the Germans with quick access into France. Additionally, Schlieffen predicted that France would eventually attack through Belgium, so Germany might as well do so first. Although Schlieffen died in 1912, Germany still used his plan when the war broke in 1914. As executed with certain modifications in the fall of 1914, the plan at first seemed likely to succeed. The swift German incursion into Belgium at the beginning of August routed the Belgian army, which abandoned the strongholds of Li�ge and Namur and took safety in the fortress of Antwerp. ...read more.

The French pressure on the German right flank caused the retreat of Kluck's army and then a general retreat of all the German forces to the Aisne River. These errors (which were sanctioned by General Headquarters) cost the Germans any further progress and they withdrew back to safe positions north of the Marne River, where they resisted attempts by the French to dislodge them. The German commander, General Erich Von Falkenhayn, decided that his troops must hold onto those parts of France and Belgium that Germany still occupied. Falkenhayn ordered his men to dig trenches that would provide them with protection from the advancing French and British troops. The Allies soon realised that they could not break through this line and they also began to dig trenches. After a few months these trenches had spread from the North Sea to the Swiss Frontier. For the next three years neither side advanced more than a few miles along this line that became known as the Western Front resulting in stalemate. The fault lay not only with Kluck, but also with the German Commander-in-Chief, Count Helmut von Molkte and probably with the Schlieffen plan itself, which failed to account for the limitations of infantry formations operating at such rapid tempos. ...read more.