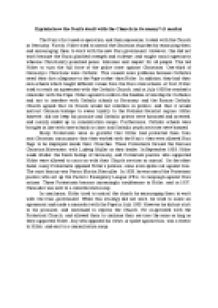 Transfer-Encoding: chunked ﻿Explain how the n**i?s dealt with the Church in Germany? (8 marks) The n**i?s first used co-operation, and then repression, to deal with the Church in Germany. Firstly, Hitler tried to control the Christian churches by reassuring them and encouraging them to work with the new n**i government. However, this did not work because the Nazis glorified strength and violence, and taught racial superiority whereas Christianity preached peace, tolerance and respect for all people. This led Hitler to turn the full force of the police state against Christians. ...read more.

Hitler however, did not keep his promise and Catholic priests were harassed and arrested, and mainly ended up in concentration camps. Furthermore, Catholic schools were brought in line with state schools or close, and Catholic youth activities were banned. Many Protestants were so grateful that Hitler had protected them from anti-Christian communists that they worked with the n**i?s; they even allowed n**i flags to be displayed inside their Churches. These Protestants formed the German Christian Movement, with Ludwig Muller as their leader. In September 1933, Hitler made Muller the Reich bishop of Germany, and Protestant pastors who supported Hitler were allowed to carry on with their Church services as normal. ...read more.

to campaign against n**i actions. These Protestants became increasingly troublesome to Hitler, and in 1937, Niemuller was sent to a concentration camp. In conclusion, Hitler tried to control the church by encouraging them to work with the n**i government. When this strategy did not work, he tried to make an agreement and made a concordat with the Pope in July 1933. However he did not stick to his promises, and continued to repress the Church. He co-operated with the Protestant Church, and allowed them to continue their services the same as long as they supported Hitler. Any who opposed his views, or spoke against him, was a threat to Hitler, and sent to a concentration camp. ...read more.