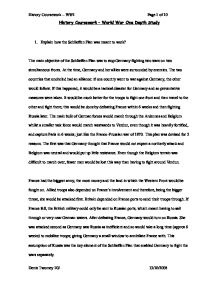 Explain how the Schlieffen Plan was meant to work?

History Coursework - World War One Depth Study 1. Explain how the Schlieffen Plan was meant to work? The main objective of the Schlieffen Plan was to stop Germany fighting two wars on two simultaneous fronts. At the time, Germany and her allies were surrounded by enemies. The two countries that encircled had an alliance: if one country went to war against Germany, the other would follow. If this happened, it would be a tactical disaster for Germany and so preventative measures were taken. It would be much better for the troops to fight one front and then travel to the other and fight there; this would be done by defeating France within 6 weeks and then fighting Russia later. The main bulk of German forces would march through the Ardennes and Belgium whilst a smaller task force would march westwards to Verdun, even though it was heavily fortified, and capture Paris in 6 weeks; just like the Franco-Prussian war of 1870. This plan was devised for 2 reasons. The first was that Germany thought that France would not expect a northerly attack and Belgium was neutral and would put up little resistance. Even though the Belgium terrain was difficult to march over, fewer men would be lost this way than having to fight around Verdun. France had the biggest army, the most money and the land in which the Western Front would be fought on. Allied troops also depended on France's involvement and therefore, being the bigger threat, she would be attacked first. Britain depended on France ports to send their troops through. If France fell, the British military could only be sent to Russian ports, which meant having to sail through or very near German waters. After defeating France, Germany would turn on Russia. She was attacked second as Germany saw Russia as inefficient and so would take a long time (approx 6 weeks) ...read more.

3. The following were equally important reasons why the stalemate on the Western Front was broken: New Technology American Entry War at Sea German Offensive of 1918 Explain how far you agree with this statement. World War One went on for much longer than anyone had ever imagined. People joined up because they didn't want to miss any action, thinking the war would be over by Christmas. Of course, by Christmas 1914, many knew that the war would last much longer than expected, and so the necessary preparations were made. However, by 1916, a stalemate had developed. Neither side had the tactical advantage but no-one wanted to surrender. There were many times during the war that this stalemate could have ended, but for whatever reasons, it didn't until the very end of the war. One invention that occurred during the war was the invention of the tank. The tank could carry 3 men inside and moved at 3mph. This was increased to 8 men and they were built with guns that could hold 13,000 bullets and fire up to 208 shells. The tank helped the Allied forces to advance on the Western Front by up to 30km, but this advantage was soon lost again. New artillery was invented which could fire over 13,000 m and high explosive shells were also invented which did more damage. Germany tried to copy the allied idea of the tank but it did not work, but their gun, "Big Bertha", could fire at Paris from over 120km away. More deadly grenades were used, which often contained deadly gasses (like Phosgene, Mustard or Chlorine) that incapacitated an enemy soldier. But technology behind the frontline was also revolutionized: transportation was upgraded, allowing more troops to be carried to the frontline in a much quicker time and radios were advancing, allowing for contact over greater distances. All of these advances helped to strengthen the attack, as troops could now attack with more power and in more deadly ways. ...read more.

They knew that millions of American troops would enter the war and their country could not sustain the blockade for much longer and so launched the offensive. With new weapons, tactics and troops from the Eastern Front, the offensive was successful as the frontline was re-drawn. This could not be upheld (due to looting of British supplies [slowing the offensive] and being too far ahead of the backup) and so the offensive ground to a halt. Then, in the 100 days after the offensive, the British made some remarkable tactical victories that eventually resulted in the allied victory of the war. None of these reasons are greater than the others as they are all inter-dependant. Nevertheless, in conclusion, I think that the American entry into the war was the most important factor that broke the stalemate. Without American aid, the blockade on German supplies would not have worked as well as it did and Germany may have been able to hold out for longer or not have broken the stalemate. Nevertheless, America would not have entered without the sinking of the Lusitania or the unrestricted U-boat campaign. If America had not entered, then Germany might not have launched the Spring Offensive and the offensive might not have worked without the use of superior weaponry. Of course, without the American entry, British morale would not have been boosted and the offensive may have entirely obliterated the British Defence and break the front line. The American brought in new equipment, men and supplies that enabled the Allies to push back the Germans to the Hindenburg line. The tanks were improved and weaponry more advanced which allowed the British to take the tactical advantage that they had lacked which brought them into a stalemate. By November 11th, all of Germany's allies had surrendered, sailors mutinied and crowds marched through the streets of Berlin, demanding an end to the war. The Kaiser had fled and the government collapsed. An emergency government was formed and immediately asked for a ceasefire. ?? ?? ?? ?? History Coursework - WWI Page 1 of 10 Denis Twomey 10J 13/10/2008 ...read more.