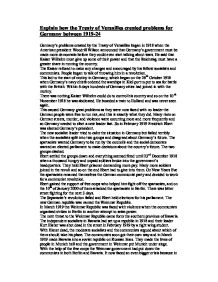 Explain how the Treaty of Versailles created problems for Germany between 1919-24.

Explain how the Treaty of Versailles created problems for Germany between 1919-24 Germany's problems created by the Treaty of Versailles began in 1918 when the American president Woodrill Wilson announced that Germany's government must be made more democratic before they could even start talking about wars. He said that Kaiser Wilhelm must give up some of their power and that the Reichstag must have a greater share in running the country. The Kaiser refused to make any changes and encouraged by his fellow socialists and communists. People began to talk of throwing him in a revolution. This led to the start of mutiny in Germany, which began on the 28th October 1918 when Germany's navy chiefs ordered the warships in Kiel port to put to sea for battle with the British. Within 6 days hundreds of Germany cities had joined in with the mutiny. There was nothing Kaiser Wilhelm could do to control his country and so on the 10th November 1918 he was abdicated. He boarded a train to Holland and was never seen again. This caused Germany great problems as they were now faced with no leader the German people were free to run riot, and this is exactly what they did. ...read more.

The Germans believed that had they not signed the armistice this may never had happened, and Germany wouldn't be in this position. As a result the Weinmar Republic faced large amounts of strikes, riots and shootings. Germans who feared communism and socialism stopped listening to reason and fought their fear with violence and bloodshed. The Treat of Versailles also led to the Kapp Putsch on 13th March 1920. Ebert and the government had fled and so the free corps were under control. A man named Wolfgang Kapp took power on that day. Kapp was supported by the Berlin police, the Free Corps and some of the army but he did not have the workers in his side. They organised a strike in support of Ebert and the government and within a day Berlin was paralysed. There was no water, gas or coal. No trains or buses ran. The Government officials refused to provide Kapp with money. After 100 hours as Germany's new leader Kapp fled to Sweden. Although now there was a new danger; the workers stayed out on strike and in the Ruhr Valley the communists formed a red army, which consisted of 50,000 soldiers. Government troops managed to defeat the red army after hard fighting but new risings broke out in other areas. ...read more.

General Ludendorff, a German war hero who was also in on the plot, entered the hall and announced that he too supported Hitler. Although on the 9th November the Bavarian leaders went back on their promise and ordered the army to attack R�hm and the s.a.s.o. Hitler and Ludendorff went off to rescue them with 2000 nazi's and marched towards Munich centre. In a narrow street they came up against armed police who opened fire. Hitler escaped with a dislocated shoulder but Ludendorff was unharmed. Later that day the two were arrested and charged with high treason. The Treaty of Versailles caused problems for Germany between 1919-24 because it resulted in the abdication of the German Kaiser and led to Germany being run by a communist democratic party. It was the cause of many strikes, which took place in hundreds of German cities and lead to the deaths of innocent civilians through bloody fighting. The treaty of Versailles lead to the invasion of one of the richest towns in Germany, which therefore lead to hyperinflation and resulted in the once strong currency of the Dutch Mark, had been lost. The treaty of Versailles caused problems for the Germans between 1919-24 because it without it, some of the most tragic events talk about above may never have happened. ...read more.