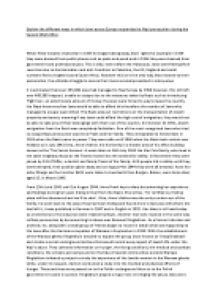 Explain the different ways in which Jews across Europe responded to Nazi persecution during the Second World War.

﻿Explain the different ways in which Jews across Europe responded to Nazi persecution during the Second World War. When Hitler became chancellor in 1935 he began taking away Jews? rights for example in 1934 they were banned from public places such as parks and pools and in 1936 they were banned from government and professional jobs. This is why, even before the Holocaust, Jews were fleeing their countries due to discrimination and anti- Semitism to Palestine, the US, England and small numbers fled to Argentina and South Africa. However this isn?t the only way Jews reacted to their persecution, the ultimate struggle to secure their races survival presented in many ways. It is estimated that over 355,000 Jews had managed to flee Europe by 1940 however, this still left over 400,000 trapped, unable to escape due to the measures taken by Nazis such as introducing ?flight tax?- an extortionate amount of money the Jews were forced to pay to leave the country, the Nazis knew very few Jews would be able to afford this therefore the number of Jews who managed to escape was limited. The Nazis also put restrictions on the transportation of Jewish property and assets, meaning if any Jews could afford the high cost of emigration, they would not be able to take any of their belongings with them out of the country. ...read more.

As a former historian and archivist, he, along with a small group of friends began to record in detail what was happening to the Jews after the German occupation of Warsaw in September in 1939. With the establishment of the Warsaw ghetto Ringleblum decided to expand the group (now known as ?Oneg Shabbat?) and create a secret underground archive that would record every aspect of Jewish life under the Nazi?s abuse. They collected information on hunger, the living conditions, the medical and sanitary conditions, the schools and camps and on the fate of Jewish communities outside Warsaw. Ringleblum initiated a project to study the experience of the Jewish women in the Warsaw ghetto while, under his request, doctors conducted a study into the medical and physical effects of hunger. These archives were passed on to the Polish underground then on to the Polish government-in-exile in London. Ringleblum played a major role in bringing the abuse Jews were suffering to the outside world. This remarkable man was also partially responsible for the planning of the Warsaw Ghetto Uprising in 1942. The use of armed resistance was the most forceful and violent reaction to the Nazi persecution with over 100 ghettos in Poland and the Soviet Union using this method. ...read more.

The ultimate defining test of courage however was when the Germans forced the Judenrá¼te to choose people from their ghetto to be deported. Everyone knew that deportation meant being transferred from their current ghetto to an extermination camp to be killed. The hardest decision that had to be made for many was that of how many children and older people to send away to be killed. Some members of Judenrá¼te felt this demand had to be met so as to continue receiving supplies for their ghettos. Rumkowski said ‘I must cut off the limbs to save the body’ whereas some felt this demand was just too extreme like Czerniakow, who committed suicide so he would not have to make the decision of who in his community he was going to be responsible for their death. In her book, ‘Eichmann’, Hannah Arendt revived controversy claiming that the Jews collaboration caused for a higher death rate. However despite the Jews attempts to escape persecution and to fight back against the Nazis, between 5 and million Jews were persecuted between 1941 and 1945 in Europe. Still, their efforts were not in vain as 3 million managed to escape. Of all the courses taken by the Jews in reaction to persecution, emigration proved most effective whereas armed resistance, the most violent approach, was the least successful. ...read more.