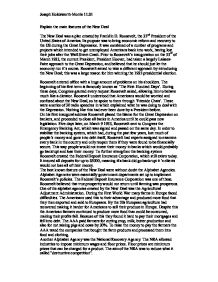 Explain the main features of the New Deal The New Deal was a plan created by Franklin D. Roosevelt, the 32nd President of the United States of America. Its purpose was to bring economic reform and recovery to the US during the Great Depression. It was combined of a number of programs and projects which intended to get unemployed Americans back into work, having lost their jobs after the Wall Street Crash. Prior to Roosevelt's inauguration on the 33rd of March 1933, the current President, President Hoover, had taken a largely Laissez-Faire approach to the Great Depression, and believed that he should just let the economy run it's course. Roosevelt aimed to take a different approach by introducing the New Deal; this was a large reason for him winning the 1932 presidential election. Roosevelt entered office with a huge amount of problems on his shoulders. The beginning of his first term is famously known as 'The First Hundred Days'. ...read more.

Roosevelt believed that true prosperity would not return until farming was prosperous. One of the alphabet agencies created by the New Deal was the Agricultural Adjustment Administration. During the First World War many farms in Europe faced difficulties. The Americans used this to their advantage and produced more food that they then exported and sold to Europeans. By the 20s European agriculture had recovered making it harder for Americans to sell their produce in Europe. Despite this the American farmers continued to produce more food than could be consumed, making their profits fall. Because of this they found it hard to pay their mortgages and fell into debt. The AAA paid farmers for cutting crop, milk, butter production and also for not raising pigs and cows by 30%. To raise the money to pay the farmers the AAA taxed the companies that bought the farm products and processed them into food and clothing. Another Alphabet Agency was the National Recovery Agency. ...read more.

FDR and other 'New Dealers' such as Eleanor Roosevelt and Harold Ickes worked to ensure that blacks received at least 10% of welfare assistance payments. However there was absolutely no attempt to end segregation or improve black rights in the South. Roosevelt also appointed many black people to positions in his administration. Because of this Roosevelt gained the support of many black Americans. Overall, the New Deal introduced many agencies and laws to help improve the economy. Many of these received strong criticism, some even being revoked years later with the Supreme Court declaring them 'unconstitutional'. The New Deal did succeed in stabilising the banks in America and provided many jobs. It was however not the reason the Great Depression ended, as the real cause was World War 2. Roosevelt is remembered very favourably for his changes though and many laws and agencies still exist today. His First Hundred Days in office are also considered the greatest ever, and every president's are now compared to his, making him one of the most beloved presidents of all time. ?? ?? ?? ?? Joseph Holdsworth-Morris 11.S1 ...read more.