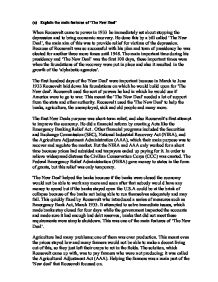 Explain the main features of 'The New Deal'

(a) Explain the main features of 'The New Deal' When Roosevelt came to power in 1933 he immediately set about stopping the depression and to bring economic recovery. He done this by a bill called 'The New Deal', the main aim of this was to provide relief for victims of the depression. Because of Roosevelt was so successful with his plan and term of presidency he was elected for another three more times until 1948. The main important time during his presidency and 'The New Deal' was the first 100 days, these important times were when the foundations of the recovery were put in place and also it resulted in the growth of the 'alphabetic agencies'. The first hundred days of the 'New Deal' were important because in March to June 1933 Roosevelt laid down his foundations on which he would build upon for 'The New deal'. Roosevelt used the sort of powers he had in which he would use if America were to go to war. ...read more.

This was one of the main features of 'The New Deal'. Agriculture had many problems; one of them was over production. This meant even the prices stayed low and many farmers would not be able to make a decent living out of this, so they just left their crops to rot in the fields. The solution, which Roosevelt came up with, was to pay farmers who were not producing; it was called the Agricultural Adjustment Act (AAA). Helping the farmers was a main part of the 'New deal' that Roosevelt focused on. Roosevelt helped the unemployed by creating more useful jobs, 500 airports; roads, schools, parks and playgrounds were built by the unemployed. Also a Federal Theatre gave work to 25,000 actors, this was called the F.E.R.A. The sick and old people were considered Roosevelt's most important achievement. It was called the Social Security Act, it gave pensions to certain old people and widows, made arrangements for the government to help other people such as the blind, crippled and orphaned, and the most important aspect was that it gave Americans a national system of unemployment insurance. ...read more.

Both Deals were directed for the same purpose, but there were actually many differences and contradictions between them. The first New Deal was more of temporary changes and the second focused more on long term ones. The first was like Roosevelt's first attempt, which did not completely work and did not satisfy everyone, it had many weak points and many were declared unconstitutional. His plan was to provide the unemployed jobs, conserving national forests and parks, restoring Civil War battlefields, building roads, and generally improving many of America's natural resources. On the Second New Deal was basically that the depression was not over and many were still unemployed, so his first deal came under attack. Then Roosevelt had to reform the New Deal with better and more long-lasting ideas. The measures Roosevelt took during the Second New Deal seemed very radical, but actually they were all programs that had been floating around in Congress for many years. Like that of The Wagner Act which provided more sense of freedom for the people. And the Social Security Act (SCA), which really helped, balance the economy by taking money from the rich. ...read more.