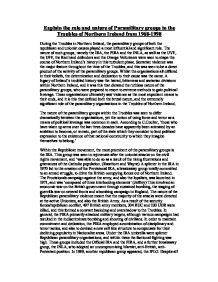 Other Loyalist paramilitaries included the Orange Volunteers and the Red Hand Defenders. In general, these all tended to be less organised in nature than the Republican paramilitary organizations, and were more reactive than active. The fragmented, overlapping and conjoining tendencies of these groups, and the use of cover names made it extremely difficult to determine the exact composition and actions of each organisation within the Troubles. The paramilitary groups played a most significant role in the Troubles, almost entirely responsible, with the aid of the RUC, UDR and the British Army, for the atmosphere of conflict and violence in Northern Ireland. It was the activities of these groups that marked out and defined this turbulent period. As Martin McGuinness pointed out, 'Armies must be fought with armies' (Rebel Hearts) and this mentality, in addition to the hurt and anger the terrorist acts caused, created a continuing cycle of violence, revenge and blame. The paramilitary groups were able to justify their own use of terror by referring to the civilian casualties the other side had caused, or the sufferings they had endured. In this way, groups began to receive the backing and support of the public, who would all have been touched by the conflict in some way. ...read more.

As Sinn Fein had announced in the latter half of the 1970's, the cause was better served by a combination of 'both the armalite and the ballot box.' Thus the paramilitary groups were seen to play a highly significant role, particularly towards the end of the troubles. The UDA, and two other parties, the PUP and the UDP were linked to various paramilitary groups, including UFF, and the Red hand defenders. Similarly, the INLA was considered to be the military wing of the Irish Republican Socialist Party, and the IRA held the same relationship with Sinn Fein. The paramilitary groups played a most significant role in the Troubles of Northern Ireland, and the nature and activities of these organisations defined the entire conflict. The groups had differing aims and beliefs, yet were often very similar in nature. They employed force and terrorist tactics for political leverage, and often had ties to a particular political party. The Loyalist organisations were of a more 'reactionary' nature, rather than the extremely ideologically based republican groups, and the republican ability to tap into the sentiment of the Catholic community that it defended was seen to distinguish the two. Both were, however, instrumental in creating an environment of tension, anger and conflict, and defined the political, social, economical, and physical components of Northern Irish society from 1968-1998. ?? ?? ?? ?? ...read more.