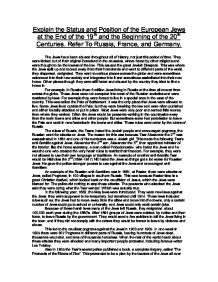 Explain the Status and Position of the European Jews at the End of the 19th and the Beginning of the 20th Centuries. Refer To Russia, France, and Germany.

Explain the Status and Position of the European Jews at the End of the 19th and the Beginning of the 20th Centuries. Refer To Russia, France, and Germany. The Jews have been abused throughout all of history, not just this period of time. They were kicked out of their original homeland in the crusades, where hated by other religions and were thought to be the lowest of the low. This caused the great Jewish Diaspora. This was where the Jews split up and moved away from their homelands and went to different parts of the world, they dispersed, emigrated. They went to various places across the globe and were sometimes welcomed into their new society and integrated into it and sometimes assimilated into their new home. Other places though they were still hated and abused by the country they tried to find a home in. For example, in Russia there 6 million Jews living in Russia at the time all moved from across the globe. These Jews were not accepted into most of the Russian societies and were restricted by laws. For example they were forced to live in a special area in the west of the country. This was called the Pale of Settlement. It was the only place that Jews were allowed to live. Some Jews lived outside the Pale, but they were breaking the law and were often punished and either brutally attacked or put in prison. Most Jews were very poor and earned little money from where they worked. ...read more.

In the period of 1880-1920 French Jews were successful and accepted into French society. It was a time of optimism, where the Jews were looking forward to their future in France. They were also integrated into society. They were fully part of the French society. And finally they were assimilated, they were willing to play down there differences and be seen as French first And Jewish second. There were only 86,000 Jews in France out of a population of 40 million, so the Jews were a very small minority of the population in France. This may explain why not many people saw them as a threat. There is a lot of evidence of Jewish success in France, for example the Jewish Church had blended in and was not seen as very different from other religions. Also individual Jewish people achieved great success in education and won high awards and honours. But there was still anti-Semitism underneath the surface of the French society. There were race theories, based on social Darwinism, several books were written which said the Jews were an inferior race, which was a danger to superior races. Also there was envy; some Frenchmen were jealous of the Jew's success and wealth. In 1892 there was a famous corruption case over the building of the Panama Canal, and the Jews were accused of all sorts of financial cheating to do with this. And also clerical anti-Semitism, part of the French Catholic church began to attack the Jews, almost like the way the church attacked the Jews in the Middle Ages. ...read more.

Many Jews were successful in business, politics, industry, banking, the arts, publishing and science. One successful Jew, Walter Rotheman, became a close friend of the Kaiser, Wilhelm the 2nd. The Jewish success in Germany could be summed up in 2 words, Emancipation, having the same legal rights as other Germans. And Integration, being fully part of the German society. German Jews had their best times between 1890 and 1914 when German economy was strong and everyone fairly wealthy. In World War 1 German Jews fought in the army and 12,000 were killed. They fought as Germans, alongside Germans. But again, like France, under the surface of their success there were still strong anti-Semitic feelings waiting to emerge. For example, after World War 1 many Jews emigrated from Eastern Europe, Russia, to Germany. Again like France they tended to be more religious and still have their traditional customs and tradition. They often lived together in certain areas, ghettos, and so were more obvious. All this made Jews easier to attack and to blame when things started to go wrong in Germany after the war. In conclusion France and Germany were had similar situations with the Jews in their country. They were accepted and lived beside one another for a while. But there was anti-Semitism laying in wait to emerge, and when it finally did it split the country in half. Usually new Jews emigrating from Russia but still keeping their traditions strong caused the rise in anti-Semitism in both countries. Where as in Russia the Jews were hated since their arrival by everyone, and were forced to live in certain areas. ...read more.