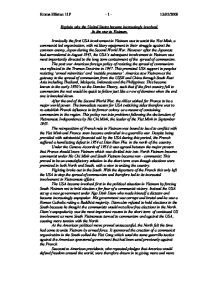 Explain Why America Became Increasingly Involved With The Vietnam War

Explain why the United States became increasingly involved In the war in Vietnam. Ironically the first USA involvement in Vietnam was to assist the Viet Minh, a communist led organization, with military equipment in their struggle against the common enemy, Japan during the Second World War. However after the Japanese had surrendered in August 1945, the USA's subsequent involvement in Vietnam was most importantly directed to the long term containment of the spread of communism. The post war American foreign policy of resisting the spread of communism was reflected in the Truman Doctrine in 1947. This promised USA support to peoples resisting 'armed minorities' and 'outside pressures'. America saw Vietnam as the gateway to the spread of communism from the USSR and China through South East Asia including Thailand, Malaysia, Indonesia and the Philippines. This became known in the early 1950's as the Domino Theory, such that if the first country fell to communism the rest would be quick to follow just like a row of dominos when the end one is knocked down. ...read more.

With the departure of the French this only left the USA to stop the spread of communism and therefore led to its increased involvement in Vietnamese affairs. The USA became involved first in the political situation in Vietnam by forcing South Vietnam not to hold elections for fear of a communist victory. Instead the USA set up a new government under Ngo Dinh Diem who made himself a dictator and became increasingly unpopular. His government was corrupt and brutal and he was a Roman Catholic ruling a Buddhist majority. Diem also refused to hold elections in the South because he thought the communists would not allow free elections in the North. Diem's unpopularity was the most important reason in the short term of continued US involvement as more South Vietnamese turned to communism and against the USA, causing more tension with the North. As the American political move proved unsuccessful, the North felt the time had come to unite Vietnam by armed force. It sponsored the creation of a communist organization in the South called the Viet Cong which used the same guerrilla tactics against the American sponsored government that had been used previously against the French. ...read more.

He also needed to show he was a strong president in order to be re-elected so his only option was to increase involvement by sending combat troops rather than advisors. In August 1964, the Americans exaggerated a minor incident in the Gulf of Tongking when a US destroyer supporting the South Vietnamese was reputedly fired on by North Vietnamese patrol boats. Following this incident the US Congress gave Johnson overwhelming support to take all necessary measures to prevent further aggression and achieve peace and security. This gave him the authority he felt was needed to justify taking direct military action. In March 1965, 3,500 US marines landed at Da Nang which meant that America was at war in Vietnam and by December 1965 there were 150,000 troops stationed in the country. The domino theory of the spread of communism convinced America that a stand had to be made somewhere and that place was Vietnam. Once the political solution had failed through the unpopular Diem government, the escalation of American involvement from financial aid and equipment to full scale military involvement was inevitable. ?? ?? ?? ?? Emma Elliston 11P - 1 - 13/05/2008 ...read more.