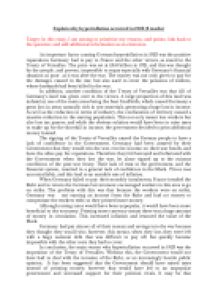 Explain why hyperinflation occurred in Germany in 1923

ï»¿Explain why hyperinflation occurred in 1923 (8 marks) Target: In this essay, I am aiming to prioritise my reasons, and points; link back to the question; and add additional information as an extension. An important factor causing German hyperinflation in 1923 was the punitive reparations Germany had to pay to France and the other victors, as stated in the Treaty of Versailles. The price was set at £6.6 billion in 1921, and this was thought by the people, and proven, impossible to repay especially with Germany’s financial situation as poor as it was after the war. The money was not only given to pay for the damages caused in the war, but also used to cover the pensions of widows, whose husbands had been killed in the war. ...read more.

The signing of the Treaty of Versailles caused the German people to have a lack of confidence in the Government. Germany had been assured by their Government that they would win the war, receive income on their war bonds, and have the allies pay for reparations. Therefore they felt betrayed and infuriated with the Government when they lost the war, let alone signed up to the ruinous conditions of the post-war treaty. Their lack of trust in the government, and the financial system, resulted in a general lack of confidence in the Mark. Prices rose uncontrollably, and this lead to an unstable rate of inflation. When Germany failed to pay their monthly instalments, France invaded the Ruhr and in return the German Government encouraged workers in this area to go on strike. ...read more.

This increased inflation and lessoned the value of the Mark. Germany had put almost all of their money and savings into the war because they thought they would win; however, this meant, when they lost, they were left with a huge national debt that was difficult to pay off, but quickly became impossible with the other costs they had to cover. In conclusion, the main reason why hyperinflation occurred in 1923 was the imposition of the Treaty of Versailles. Without this, the Government would not have had to deal with the invasion of the Ruhr, or an increasingly hostile public opinion. It has been suggested that the Government should have raised taxes instead of printing money; however that would have led to an unpopular government and increased support for their political rivals. It may be that hyperinflation was inevitable and the wide assortment of contributing factors stated above support this point. ...read more.