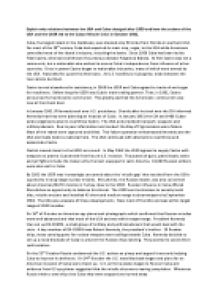 Explain why relations between the USA and Cuba changed after 1959 and how the actions of the USA and the USSR led to the Cuban Missile Crisis in October 1962.

Transfer-Encoding: chunked ﻿Explain why relations between the USA and Cuba changed after 1959 and how the actions of the USA and the USSR led to the Cuban Missile Crisis in October 1962. Cuba, the largest island in the Caribbean, was situated only 90 miles from Florida in southern USA. For most of the 20th century Cuba had exported its main crop, sugar, to the USA while Americans controlled most of the island?s industry, including the banks. Since 1959 Cuba had been led by Fidel Castro, who had overthrown the previous dictator Fulgencio Batista. At first Castro was not a communist, but a nationalist who wished to ensure Cuba?s independence from influence of other countries. Once in power Castro began to nationalise industries, many of which were owned by the USA. Naturally this upset the Americans. As U.S. hostility to Cuba grew, trade between the two nations declined. Castro turned elsewhere for assistance; in 1960 the USSR and Cuba agreed to trade oil and sugar for machinery. Before long the USSR was Cuba?s main trading partner. Then, in 1961, Castro announced he had become communist. This greatly alarmed the Americans: communism was now at their back door. ...read more.

Russian influence in Cuba offered Khrushchev an opportunity to balance this threat. The USSR sent technicians to secretly build silos, missile erectors and installed 43 short and medium range nuclear weapons by September 1962. The USA was unaware of these developments. Now most of the USA and was within target range of USSR missiles. On 14th of October an American spy plane took photographs which confirmed that Russian missiles were well advanced and that most of the USA and was within target range. President Kennedy then set up EX-COMM, a small group of military and political advisers that would deal with the crisis. A key member of EX-COMM was Robert Kennedy, the president?s brother. 18 Russian ships, many carrying parts for nuclear weapons were sailing towards Cuba. Kennedy decided to set up a naval blockade of Cuba to prevent the Russian ships landing. They wanted to avoid direct confrontation. On the 23rd October Russia condemned the U.S. actions as piracy and argued it was only helping Cuba to improve its defences. On 24th October the U.S. naval blockade began and plans for an American invasion of Cuba were drawn up. ...read more.

Khrushchev was criticised in the USSR for losing face in this game of brinkmanship. As a result he was removed from office in 1964. Khrushchev however viewed his actions during the Cuban missile crisis as a success because the U.S. had removed their missiles from Turkey and the rest of Europe in April 1963. The USA agreed that Castro would remain the communist leader of Cuba and the security of Cuba was recognised. The USA and the USSR realised how close they had come to nuclear war and the Cuban missile crisis helped promote peaceful coexistence. A direct phone link or ‘hotline’ between the two leaders of the USA and USSR was set up in 1968. The Cuban missile crisis showed the need for nuclear arms control and led to the first attempt to end the nuclear arms race. As part of this agreement in 1963 the Partial Nuclear Test Ban Treaty stopped atmospheric and underground testing of nuclear weapons. Also in 1969 the USA and the USSR signed the Treaty on the Non-Proliferation of nuclear weapons which paved the way for a period of détente between the superpowers in the 1970s. However within two years both leaders were gone: Khrushchev overthrown and Kennedy assassinated. ...read more.