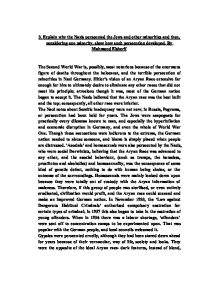 Explain why the Nazis persecuted the Jews and other minorities and then, considering one minority, show how such persecution developed.

3. Explain why the Nazis persecuted the Jews and other minorities and then, considering one minority, show how such persecution developed. By Mahmoud Elsherif The Second World War is, possibly, most notorious because of the enormous figure of deaths throughout the holocaust, and the terrible persecution of minorities in Nazi Germany. Hitler's vision of an Aryan Race extensive far enough for him to ultimately desire to eliminate any other races that did not meet his principle; atrocious though it was, most of the German nation began to accept it. The Nazis believed that the Aryan race was the best built and the top; consequently, all other race were inferior. The Nazi notes about Semitic inadequacy were not new; in Russia, Pogroms, or persecution had been held for years. The Jews were scapegoats for practically every dilemma known to man, and especially the hyperinflation and economic disruption in Germany, and even the whole of World War One. Though these accusations were ludicrous to the extreme, the German nation needed to abuse someone, and blame is simply placed when people are distressed. 'Asocials' and homosexuals were also persecuted by the Nazis, who were social Darwinists, believing that the Aryan Race was advanced to any other, and the asocial behaviour, (such as tramps, the homeless, prostitutes and alcoholics) and homosexuality, was the consequence of some kind of genetic defect, nothing to do with human being choice, or the outcome of the surroundings. ...read more.

that he had 'lanced the Jewish abscess'. This indicated a cold hearted and deep rooted hatred. The Nazis believed the Jews to be the major motive for Communism, or Bolshevism, in Germany and in the rest of Europe; Communism was a huge threat to Hitler's power, and he made a point of exterminating Communism totally before he came to power, in the form of other communist political parties. To eradicate the Jews would be an additional pace up for him, and though there were only 500,000 of them in 1933, they formed 'a propaganda stereotype, a collection of negative attributes representing the antithesis of the qualities of a true German'. There are two main ideas about Hitler and his intentions towards the Jews from 1933 onwards; the intentionalists believe that the holocausts and the massacre of the Jews was planned by Hitler even though sometimes he have had to remove slightly due to unforeseen events, and world opinion. The structuralists believe that the holocaust was due to competitions among Nazi political leaders, seeking to find more and more awful ways of punishing the Jews. It may be true about Hitler's father being half Jewish, or that he may think that his own father was half Jewish except, we don't have definite evidence of this at all and only a slight suggestion. Marlis Steinert said that 'Everything he hates in himself, the Fuhrer projects on the Jews; everything that causes his and Germany suffering is the fault of the Jews'. ...read more.

This shows the unavoidable association he made between the Jewish society and the warfare. Emigration and deportment of the 214,000 remaining Jews continuing for about two years, during which time Hitler actually told Goring that 'the Jewish question be once and for all co-ordinated and solved one way or another'. Throughout the summer of 1941, Russia was invaded. This huge landmass, the largest continent in the world, established another problem: here were many more Jews. Hitler had been manufacturing plans for deportment to Madagascar, but now the opportunity of mass emigration no longer existed in the autumn of 1941, millions of Eastern European Jews were slaughtered. Hitler's Final Solution was sketched at the Wansee Conference on the 20th January 1942 and most of the Jews were murdered in the years of 1942-1944. Hitler's reluctance to confess or to heed on what really happened in the concentration camps that he placed up, and his denial to refer to their annihilation in unambiguous terms, shows that Hitler wished to be almost as ill-mannered of what was really happening as the rest of the German people. The Nazi persecution of the Jews developed to such boundaries that even today they are looked upon as indignation. Whether Hitler had foreplanned everything that happened, or whether it was the consequence of Nazi politics and rivalry eventually going out of control, the Jews were treated terribly, as were other minorities: for instance, the Bedouins were practically annihilated during this period. ...read more.