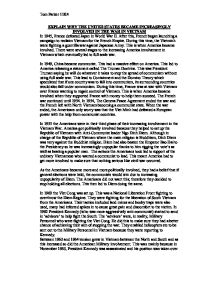 EXPLAIN WHY THE UNITED STATES BECAME INCREASINGLY INVOLVED IN THE WAR IN VIETNAM In 1945, France defeated Japan in World War II. After this, French began launching a campaign to reclaim Vietnam for the French Empire. During this time, the Vietminh were fighting a guerrilla war against Japanese Army. This is when America became involved. There were several stages to the increasing America involvement in Vietnam which eventually led to full scale war. In 1949, China became communist. This had a massive effect on America. This led to America releasing a statement called The Truman Doctrine. This was President Truman saying he will do whatever it takes to stop the spread of communism without using full scale war. This lead to Containment and the Domino Theory which speculated that if one country was to fall into communism, its surrounding countries would also fall under communism. ...read more.

The actions the Americans took led to support of the ordinary Vietnamese who wanted a communist to lead. This meant America had to get more involved to make sure that nothing serious like civil war occurred. As the Americans became more and more politically involved, they had a belief that if general elections were held, the communists would win due to increasing unpopularity of Diem. The Americans did not want this; therefore they decided to stop holding all elections. This then led to Diem doing the same. In 1960 the Viet Cong was set up. This was a National Liberation Front fighting to overthrow the Diem Regime. They were fighting for the liberation of South Vietnam from the Americans. Their tactics included land mines and booby traps were also used, many had infected spikes in to cause great pain and discomfort to the victim. In 1962 President Kennedy (who was more aggressively anti-communist) ...read more.

To him this meant if he felt necessary, he could take the USA into full-scale war. On 8th March 1965, 3500 US marines and Combat troops came ashore at Da Nang. This meant America was officially at war with Vietnam. The main reason the US became increasingly involved in the Vietnam War was, in my opinion, the Domino Theory. This is because the US promoted the Theory and it threatened Asia and this meant America would do anything to prevent this happening. The Gulf of Tonkin incident was inevitably sparked by the Domino Theory because Johnson was prepared to take the US into a full-scale war to achieve peace and security and was the beginning of the full measures. However, the other reasons also contributed to why the Americans became increasingly involved in the Vietnam War because the change of President in the US after Kennedy raised the tension within the USA and the tension was already rising in the North and South of Vietnam. Word Count: 800 (without title) Tom Parker 11K4 ...read more.