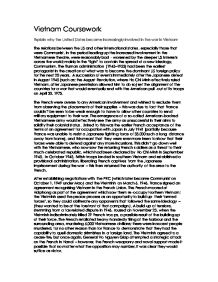 Vietnam Coursework Explain why the United States became increasingly involved in the war in Vietnam The relations between the US and other international states, especially those that were Communist, in the period leading up the increased involvement in the Vietnamese theatre, were reasonably bad - worsened by the deeper US interests across the world; mainly in the 'fight' to contain the spread of a new ideology, Communism. The Truman administration (1945-1953) had been the earliest protagonist in the creation of what was to become the dominant US foreign policy for the next 20 years. A succession of events immediately after the Japanese defeat in August 1945 (such as: the August Revolution, where Ho Chi Minh effectively ruled Vietnam, after Japanese permission allowed him to do so) set the alignment of the countries for a war that would eventually end with the American pull-out of its troops on April 30, 1975. The French were averse to any American involvement and wished to exclude them from observing the placements of their supplies - this was due to fact that France couldn't be seen to be weak enough to have to allow other countries to send military equipment to their war. The emergence of a so-called American-backed Vietnamese army would effectively see the army as unsuccessful in their aims to solidify their colonial status. Linked to this was the earlier French acceptance of the terms of an agreement for occupation with Japan in July 1941 (partially because France was unable to resist a Japanese fighting force of 35,000 such a long distance away from home), and this meant that they were ever more keen to show that their forces were able to defend against any more incursions. ...read more.

Ironically, the landing strip was there from the First Indochina War (1946-54) for Operation Castor to block Vietminh forces and their transport objectives - now that that had been destroyed by the Vietminh, the battle and its outcomes marked the end of France's colonial status; its reputation significantly dented by losing to a non-national force in a war where it was supposed to be the superpower. The new U.S. President, Eisenhower, explored the hypothesis behind the supposed 'Domino Theory' (the term has been coined by the U.S Secretary of State, John Dulles) in which he felt reflected the increasing Communist influence in the area - this being a phrase which would become widely used and a predominant reason for the U.S. proper involvement in the 1960s. In combination with the 'Iron Curtain' and many other events which had been linked to the USSR in some form, the opinions of many Americans regarding their own security were now influenced and dominated by the 'Red Scare' which encompassed anyone who supported socialism or workers' rights. This domestic atmosphere was capitalised on by the various U.S. administrations, who now felt that if Americans' were to be 'on the ground' in Vietnam there would not be any civil unrest back home unless there were to be events that would change that (as what would happen in the late 1960s and 1970s). This meaning that increasing involvement in an area where there weren't any objections to it would perhaps even show that the President had, in some way, power that represented grassroots America - leading to a re-election of that individual. ...read more.

On 2 August, 1964, the destroyer USS Maddox fired at three North Vietnamese torpedo boats, resulting in damage to the three boats. Two days later the Maddox (having been joined by the destroyer Joy) reported a second engagement with North Vietnamese vessels. The 'aggression' in the latter never occurred and even before confirmation of the attack(s) could be received, Johnson had decided to return fire; knowing that there was nothing happening and in fact was conspiring to convince Americans' that their soldiers were under fire - giving them a reason to support a war which was now imminent. Congress was kept in the dark over what the happenings actually were, possibly because they did not have readily-available access to military intelligence. In a speech on Capitol Hill, Johnson addressed Congress and it was clear, through the slow release of discrete propaganda by the Administration over the years, that they would support the Gulf of Tonkin resolution - they did, it was passed unanimously in the House of Representatives and by a large margin in the Senate. Congress was prepared to secure any motion which defended and/or increased American personnel; this meant they passed the motion which in turn meant that the US Army could "take all necessary steps, including the use of armed force, to assist any member or protocol state of the Southeast Asia Collective Defense Treaty requesting assistance in defense of its freedom". Johnson now had the legal backing he needed to pursue his objectives in the theatre and so with the instigation of 'Operation Rolling Thunder', the war had now begun. ...read more.