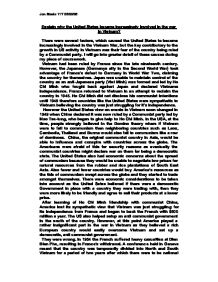 Explain why the United States became increasingly involved in the war in Vietnam?

Explain why the United States became increasingly involved in the war in Vietnam? There were several factors, which caused the United States to become increasingly involved in the Vietnam War, but the key contributory to the growth in US activity in Vietnam was their fear of the country being ruled by a Communist party. I will go into greater detail of these causes during my piece of coursework. Vietnam had been ruled by France since the late nineteenth century. However, the Japanese (Germanys ally in the Second World War) took advantage of France's defeat to Germany in World War Two, claiming the country for themselves. Japan was unable to maintain control of the country as an anti-Japanese party (Viet Minh) was formed and led by Ho Chi Minh who fought back against Japan and declared Vietnams independence. France returned to Vietnam in an attempt to reclaim the country in 1945. Ho Chi Minh did not disclose his communist intentions until 1949 therefore countries like the United States were sympathetic to Vietnam believing the country was just struggling for it's independence. However the United States view on events in Vietnam soon changed in 1949 when China declared it was now ruled by a Communist party led by Mao Tse-tung, who began to give help to Ho Chi Minh. ...read more.

This would mean that even though untrue, they would lose the backing of the American voters who were strong believers in McCarthy and anti-communism so that Eisenhower's party would not be re-elected in the next US elections. The Viet Minh dominance and victory over a powerful West European state could give communist parties around the world the confidence and determination to gain control of their countries by force. As a result of these factors in 1955, America helped the Catholic Ngo Dinh Diem set up the republic of South Vietnam. The US realised that Diem treated his people, especially the peasants most of whom were worshipers of Buddhism, cruelly and with contempt, but still allowed him to be leader. This shows how desperate the United States was for the country to be anti-Communist as they were prepared to allow a vicious dictator to rule. During 1955 America sent a team of advisors to mount a propaganda campaign to highlight false accusations that Ho Chi Minh was killing thousands of political opponents in the north of the country. When this failed America ploughed $1.6 billion to support Diem's regime. ...read more.

Now that he had support of the American public as well, Johnson faced no initial opposition, which was a major factor in allowing the US to start sending combat troops to Vietnam and escalating their involvement in the countries affairs. On March 1965 3500 US combat troops came ashore at Da Nang thus starting the war with Vietnam. In order to defeat the Vietcong, the United States launched Operation Rolling Thunder in February 1965 where extensive bombing raids were made on military and industrial targets in North Vietnam. There were more bombs dropped on Vietnam than in the whole of the Second World War. This tactic employed by the United States shows they were fully committed to winning the war. To conclude I have highlighted several factors which increased the United States involvement in Vietnam. However, I believe the key factor was the Americans belief of the domino effect where a conspiracy was taking place in China and USSR to get communist governments to power. The US believed that if Vietnam were to fall to communism then it would be the first in a long line of countries such as Laos and Cambodia to fall as well like a line of dominoes. Jon Steele 11Y 28/02/08 ...read more.