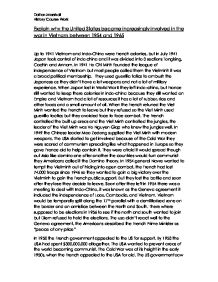 Explain why the United States became increasingly involved in the war in Vietnam between 1954 and 1965 Up to 1941 Vietnam and Indo-China were French colonies, but in July 1941 Japan took control of indo china and it was divided into 3 sections Tongking, Cochin and Annam. In 1941 Ho Chi Minh founded the league of independence of Vietnam but most people called them the Vietminh it was a broad political membership. They used guerrilla tatics to ambush the Japanese as they didn't have a lot weapons and not a lot of military experience. When Japan lost in World War II they left indo-china, but France still wanted to keep there colonies in indo-china because they still wanted an Empire and Vietnam had a lot of resources it has a lot of rubber, rice and other foods and a small amount of oil. When the French retuned the Viet Minh wanted the French to leave but they refused so the Viet Minh used guerrilla tactics but they avoided face to face combat. The French controlled the built up areas and the Viet Minh controlled the jungles, the leader of the Viet Minh was Vo Nguyen Giap who knew the jungles well. In 1949 the Chinese leader Mao Zedong supplied the Viet Minh with modern weapons. The USA started to get involved because of the Cold War they were scared of communism spreading like what happened in Europe so they gave France aid to help contain it. ...read more.

They both saw South Vietnam as a place to stop communist and the Domino theory working and America was determined to do anything to stop communist. The only reason Eisenhower and Kennedy supported Diem because he was anti-communist. By 1963 Diem's rule in South Vietnam was so corrupt that he was facing continuous opposition. Several Buddhist monks burned themselves to death in protest. Diem faced opposition from trade unions and a general strike was called. The South Vietnamese army was called ARVN which was helped by the USA, but before there were soldiers in Vietnam the military advisers helped the ARVN with military tactics to help them fight the NLF 'National Liberation Front' but Diem called them the Vietcong. The Vietcong's supports grew very quickly by 1961 there were 20,000 but in 1964 there was 100,000. The 3 aims of the NLF were to over throw Diem, get USA out and Re-unite South and North Vietnam. Kennedy threatened to withdraw military aid and then backed a plot by South Vietnamese generals to arrest Diem. He was murdered just three weeks before Kennedy's own assassination, Johnson visited South Vietnam and went much further than Kennedy. He increased US support to 23,000 men. Johnson became determined to send combat troops to Vietnam. In August 1964 the USA claimed that US warships had been attacked in the Gulf of Tonkin. ...read more.

In 1969 he began peace talks, and started the withdrawal of US forces, but at the same time stepped up attacks on North Vietnam. Nixon began to withdraw US forces in 1969, but he did not want to reveal that to the North. To cover the withdrawal he stepped up Operation Rolling Thunder, US forces also invaded Laos and Cambodia and bombed both countries. Talks between the USA and the North Vietnamese went on for 5 years. Agreement was finally reached in 1973 when the US withdrew. The defence of South Vietnam was then taken over by the ARVN,. It held out until May 1975. When South Vietnam fell it was united with the North. Saigon was renamed Ho Chi Minh City. The Vietnam War causalities were high 2,000,000 men, women and children were killed. Over 7,000,000 tonnes of bombs were dropped on North Vietnam, more than three times the amount dropped during the 2nd World War, but the biggest blow to the Americans was that the war cost $120,000,000,000 So the main reason for USA getting involved was to stop the spread of communism throughout Asia but they failed because the neighbouring countries Laos and Cambodia eventually became communist so there Domino Theory was right. I think if America had of stayed in Vietnam for another year or 2 the communist in Vietnam would eventually of fallen and the country would of been joined as 1 as a democratic country. ?? ?? ?? ?? Dalton Marshall History Course Work ...read more.