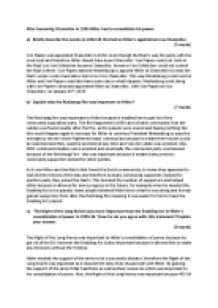 Factors in Hitler's consolidation of power

As it was Hitler and the n**i?s that found the Dutch communists, to many they appeared to look like the heroes of the day and therefore as many communist supporters looked for another party they joined the n**i?s. This boosted the number of supporters and helped Hitler because in allowed for more progress in the future, for example when he needed the Enabling Act to be passed, many people believed Hitler knew what he was doing and he had gained supporters from after the Reichstag fire meaning it was easier for him to have the Enabling Act passed. 1. ?The Night of the Long Knives was more important than the Enabling Act in Hitler?s consolidation of power in 1933-34.? How far do you agree with this statement? ...read more.

Therefore, breaking the partnership between Hitler and the SA and gaining a relationship between Hitler and the army was essential for his consolidation of power. However, the enabling act was important towards Hitler?s consolidation of power because it got rid of the Weimar without the public being aware. It also allowed Hitler to pass any laws without going through the Weimar - he became a dictator. This was necessary because it meant he was able to control the people as well as giving him ultimate power. Overall the Night of the Long Knives was more important as there were more positive and rewarding effects towards Hitler?s consolidation of power in 1933-34 than the Enabling Act, because the Night of the Long Knive allowed Hitler to get rid of the one force that had the potential to destroy him - the SA. ...read more.