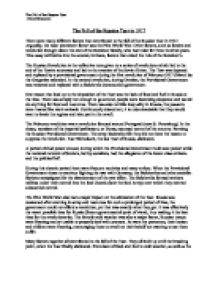 Factors leading to the fall of the Russian Tsar.

The Fall of the Russian Tsar in 1917 There were many different factors that contributed to the fall of the Russian Tsar in 1917. Arguably, the most prominent factor was the First World War. Other factors, such as famine and revolution brought about the end of the Rominov family, who had ruled for three hundred years. This essay will delve into the several, intricate, factors that ended the rule of the Rominov's. The Russian Revolution is the collective term given to a series of revolutions which led to the end of the Tsarist autocracy and led to the creation of the Soviet Union. The Tsar was deposed and replaced by a provisional government during the first revolution of February 1917 (March by the Gregorian calendar). ...read more.

Continuously discontent, it is understandable that they would want to break the regime and take part in the revolt. The February revolution was a revolution focused around Petrograd (now St. Petersburg). In the chaos, members of the imperial parliament, or Duma, assumed control of the country. Forming the Russian Provisional Government. The army leadership felt they did not have the means to suppress the revolution. Tsar Nicholas II, the last Tsar of Russia, abdicated. ?A period of dual power ensued, during which the Provisional Government held state power while the national network of Soviets, led by socialists, had the allegiance of the lower-class citizens and the political left. ...read more.

It was effectively the worst possible time for Russia (from a governmental point of view), thus making it the best time for the revolutionaries. The bitterly cold weather was also a major factor, Russian troops were freezing and so unable to properly deal with protests. As were the protesters, their homes and children were freezing, encouraging them to revolt on their behalf not wanting to see them suffer. Many factors together all contributed to the fall of the Tsar. They all built up until the breaking point, when the Tsar finally abdicated. From lack of food and fuel to cold weather, as well as the Tsars inability to rule effectively and as a strong leader that Russia so badly needed, they resulted in abdication. ?? ?? ?? ?? The Fall of the Russian Tsar -David Orelowitz ...read more.