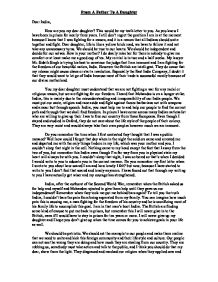 From a father to a daughter.

From A Father To A Daughter Dear Indira, How are you my dear daughter? This would be my tenth letter to you. As you know I have been in prison for nearly three years. I still don't regret the position I am in at the moment because I know that I was fighting for a reason, and it is a reason that all Indians should unite together and fight. Dear daughter, life is like a yellow brick road, we have to follow it and not take any unnecessary turns. We should be true to our hearts. We should be independent and decide for our selves. How is your mother? I do dearly miss her for there is nobody to give me comfort or at least make me a good cup of tea. My re-trial is in two and a half weeks. My lawyer Mr. Sidath Singh is trying his best to convince the judge that I am innocent and I am fighting for the freedom of our beautiful nation, India. However the British are intelligent. They do sense that my release might cause chaos or start a revolution. Especially the East India Company, I doubt it that they would want to let go of India because most of their trade is successful mostly because of our divine motherland. ...read more.

I have found out that through my writing to you I have actually got wiser and my courage has strengthened. Indira, after the outburst of the Second World War, remember when the British asked us for help and myself and Mohandas rejected to give them help until they gave us our independence? Remember when they took me put me behind bars again? To tell you the truth Indira, I couldn't bare the pain from being separated from my family. You can imagine how much pain this is causing me, a man fighting for the freedom of his country and he is sacrificing most of his family life to accomplish this goal. I am in that man's boot Indira. The British are finding some kind of excuse to put me back in prison, but remember this I will never give in to the British, even if I would have to stay in prison for ten years or more. I will never give up my daughter and I hope you don't give up when the time comes for you to achieve goals in your life as well. We should be patriotic. We should set the example to our people and make them realize that we need to unite and kick this foreign community and their life style and culture. ...read more.

to settle it peacefully, instead he left the village and the new king vowed to pay anybody who would bring him his head. Once a man came across king Ashoka and wanted to kill him and take his head. Instead the great king drew a circle with his finger nail around his neck and disjointed it from his body and handed it over. As you see my child war is not the solution to this crisis. Like I said, we should fight for freedom through speech and show her Majesty that, we Indians want to be independent and want have total control of the government and of India without foreign interference. My child, I have written for about half an hour now and it is nearly time for my launch. Please give my love to your mother and tell her that I miss her with all my life and that I wish I was there at the moment, but somebody has to do something at some point to free our nation. Finally, Indira may Vishnu bless you and your mother and keep you'll in good health. Take care of you self, my daughter for I will always be there in your heart and you in mine. With lots of love Yours Truly, You're Farther, Papa Jawaharlal Nehru Sean Ranabahu 10MTr English MBe ...read more.