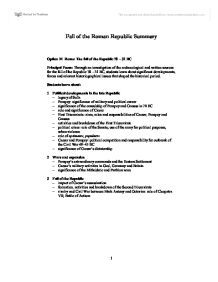 Fall of the Roman Republic Summary Option M Rome: The fall of the Republic 78 - 31 BC Principal Focus: Through an investigation of the archaeological and written sources for the fall of the Republic 78 - 31 BC, students learn about significant developments, forces and relevant historiographical issues that shaped the historical period. Students learn about: 1 Political developments in the late Republic - legacy of Sulla - Pompey: significance of military and political career - significance of the consulship of Pompey and Crassus in 70 BC - role and significance of Cicero - First Triumvirate: aims, roles and responsibilities of Caesar, Pompey and Crassus - activities and breakdown of the First Triumvirate - political crises: role of the Senate; use of the army for political purposes; urban violence - role of optimates, populares - Caesar and Pompey: political competition and responsibility for outbreak of the Civil War 49-45 BC - significance of Caesar's dictatorship 2 Wars and expansion - Pompey's extraordinary commands and the Eastern Settlement - Caesar's military activities in Gaul, Germany and Britain - significance of the Mithridatic and Parthian wars 3 Fall of the Republic - impact of Caesar's assassination - formation, activities and breakdown of the Second Triumvirate - rivalry and Civil War between Mark Antony and Octavian: role of Cleopatra VII; Battle of Actium 1. Political Developments in the Late Republic Legacy of Sulla * In 88, first civil war in Rome was fought between Marius and Sulla; ended in 82 with defeat of Marius. * Sulla now introduced proscriptions. * Sulla had the Tribal Assembly vote to give him powers of a dictator (82) for purpose of restoring the Republic. He achieved this through military force and violence. * Use of client professional armies was one way of guaranteeing political dominance. * Sulla tried to revive Republican constitution and increase authority of Senate. * Rome continued to face foreign threats, which meant generals with armies had to be found. ...read more.

Between 53-52, individual Gallic tribes began to rise up against Caesar, but each revolt was successfully put down. - However, Vercingetorix (of Arveni tribe) in 52 managed to unite all of Gaul. Vercingetorix managed to persuade all the Gauls to burn their homelands, except for the city of Avaricum, who refused; Caesar besieged them and massacred its inhabitants.[Cd21] - (52) Most decisive battle was at town of Alesia, where Vercingetorix[Cd22] had moved a large force to. Caesar encircled the town and with rows of trenches, some facing Alesia, other facing outwards. He created pits filled with sharp implements to reduce possibility of anyone escaping out of Alesia or reinforcements entering. - Romans camped between these two groups of trenches and fought in both directions for days. Eventually, Vercingetorix and his forces capitulated. - Trench defences: * Trenches were 20ft wide * Siege machines 650 yards behind trench * Before siege machines was a double row of 15ft deep trenches filled with water * Siege machines had palisaded ramparts 12ft high, and towers every 130 yards encircled the trenches * Inside inner trenches were sharp stakes upon which people were impaled. As well, there were deep pits with sharp sticks hidden by loose dirt. * At very front were 8 rows 3ft apart, which had blocks 1ft long fitted with iron hooks. - Plutarch's Lives and Caesar's Commentaries describe the encounter with Vercingetorix. Caesar describes in detail the double rows of trenches, his motivational speech to his troops and his flying red cloak leading them into battle. - (52) Caesar writes in Commentaries that Vercingetorix was originally serving with Roman legions but quickly roused with his passion all the Gauls against Caesar. Caesar refers to Vercingetorix as a man of "boundless energy" and mentions how he terrorised any Gauls wavering in their loyalty. - Caesar in Commentaries also describes how the trenches were designed. 51 - In the SW of Gaul, Caesar's troops were engaged in their last battle against the Gauls at Uxellodunum. ...read more.

- He believe to have been a grest tatic - Caesar's success was to his ;ersonal leadership... loved his soliders personally - He was in front line in some fight.. setting examples to his soldier. - His an inspiration - Finally Caesar won... gallic communities lose - Every movement is motivated by potilical forces. - After the war, he conqured Gaul... still not happy his ambition is to take over rome. - Later on he moved with his to Italy and had civil war with pompey. [Cd1]He also wanted power, also wanted trimvuant. [Cd2]e.xample: if Caesar was in power at the time.. pompey would support him [Cd3]was through the eastern settlement of the pirates [Cd4]One of rome's richest man... nearly every asset of rome was his. [Cd5]Supported pompey to get the extrorindary command... so he gets pompey's support than when voting for consul [Cd6]After consul in 63, developed the idea of 'concordia ordinum'. [Cd7]After he was exiled and returned he still supported pompey [Cd8]SCULLARD QUOTE [Cd9]CICERO QUOTE [Cd10]He wanted to go to Gaul to fight and therefore gain power [Cd11]DID all this after consul... because he promised pompey and crassus as well as his army.. his keeps his promise. Did it even if the senators didn t like it and didn't approved him in doing so. [Cd12]He was able to gain further 5 years using tribunes [Cd13]Believed that if Caesar did comprised then the civil war would be avoided [Cd14]Only saw good of the rich and not the people [Cd15]Served quaestorship in hispania [Cd16]Defeated the privacy in the eastern [Cd17]Sulla loved him... he defeated the people sulla wanted ti defeat [Cd18]Extraordinary command given to poempey because he was able to deal with the pirates... and therefore they wanted him to deal with mithradates. [Cd19]Together with his son inlaw to try rule over Rome but stoped by Lucullus [Cd20]Was then later exiled because he didn't consult the senators about some actions and therefore was criticised. [Cd21]Persuaded all the Gallic community to go against Caesar... [Cd22]Blocked caesar's food source. ?? ?? ?? ?? 1 ...read more.