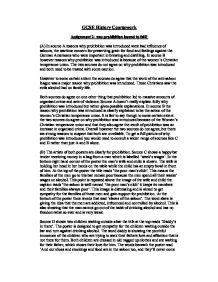 However it is possible that percentage seized of both may have actually decreased. Source H is another statistics table published by the city of Philadelphia police department, showing the number of arrests for drinking-related offences in the years 1920-25. The numbers of drunk drivers in 1920 were 0 which increased to 820 in 1925 this shows a dramatic increase in drink-driving. The source also shows the total number of arrests for drinking-related offences in 1920 were 20,410 also dramatically increased to 57,703 in 1925. However there was a decrease in the number of drunk and disorderly conducts which actually decreased from 6,097 in 1920 to 5,522 in 1925 although it had actually increased from 6,097 to 8,076 in 1923 first. However this source has its limitations it only accounts for the number of drinking-related offences only in Philadelphia state rather than the whole of the USA. Also it only mentions arrests and not convictions. Some of these arrests could have been released and let go without convictions as some law enforcers could have been bribed. However source H only shows the arrests in the Philadelphian state it does how that the number of arrests for drink related offences had increased which shows that the law enforcers were doing their job correctly and arresting law breakers. To a certain extent both sources prove that prohibition was not successful. An increase in the number of stills and gallons of liquor seized and the number of arrests made are all shown in sources G and H. But both are limited as source G does not show the total amount which could be a small percentage, and source H only shows information from the state of Philadelphia. In conclusion, despite the limitations of both sources, they do generally prove that during the 1920s that prohibition was not successful. If prohibition was successful you would expect a decrease in all the figures in the table. ...read more.

Source H is another statistics table from 1920-25 showing the number of arrests for drinking-related offences in the city of Philadelphia. The figures show the number of arrests with those who were: drunk, drunk and disorderly conduct, drunk drivers which have all have increased in the years 1920-25. However both sources are limited as source G does not show the total amount of gallons and stills seized. Source H is only statistics from Philadelphia and does not show the number of convictions as those arrested could have released without charge due to bribery. Overall Prohibition proved too hard to enforce and its failure was largely inevitable. Prohibition started off with some success but in the long run the American people just did not want to obey this particular law. Prohibition led to massive increase in crime and as a result gangsters became rich. The gangsters were able to bribe law enforcers to 'turn to a blind eye'. Although there were a few law enforcers who were not corrupt but there weren't enough to enforce the law. Prohibition agents were not paid very well by the government this is why most of them were willing to accept bribes and be corrupted by gangsters. Source I supports this view and that even clerks, politicians and magistrates were willing to accept bribes and that it was happening nationally all over the USA ('The National Gesture'). Source J is a 'police man talking about Chicago in the 1920s' it supports source I in showing that it was impossible to refuse a bribe. All the sources show that although there was some initial support for prohibition, in the end because of the rise of the gangsters, the corruption of law enforcers and the open ignorance of the American people to ignore a law which they despised. Prohibitions failure was inevitable and in 1933 prohibition was rebelled and Americans were once again able to buy, sell, and transport intoxicating liquors openly in the USA. ...read more.