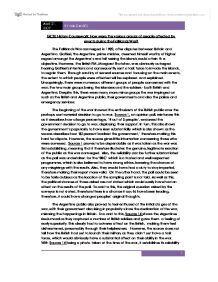 GCSE History Coursework: How were the various groups of people affected by events during the Falklands War?

GCSE History Coursework: How were the various groups of people affected by events during the Falklands War? The Falklands War converged in 1982, after disputes between Britain and Argentina. Galtieri, the Argentine prime minister, deemed himself worthy of higher regard amongst the Argentine's and felt seizing the islands could attain the objective. However, the British PM, Margaret Thatcher, was obviously outraged hearing Galtieri's intentions and consequently sent a task force to invade the islands, to regain them. Through scrutiny of several sources and focusing on the main events, the extent to which people were affected will be explored and explained. Unsurprisingly, there were numerous different groups of people concerned with the war; the two main groups being the islanders and the soldiers- both British and Argentine. Despite this, there were many more minor groups the war impinged on such as the British and Argentine public, their governments and also the police and emergency services. The beginning of the war showed the enthusiasm of the British public over the perhaps controversial decision to go to war. Source 1, an opinion poll, reinforces this as it describes how a large percentage, '4 out of 5 people', endorsed the government decision to go to war, displaying their support. In turn, this also shows the government's popularity to have risen substantially which is also shown as the source describes how '80 percent backed the government,' therefore making this hard for dispute. However, the source gives little information concerning those who were surveyed. Source 1 proves to be dependable as it was taken as the war was first establishing, meaning that it therefore illustrates the genuine, legitimate reaction of the public as the war converged. ...read more.

However, as he experienced the war first hand, his information is anecdotal and as he could have been biased- making the British appear superior, making them appear to be heroes. Also, having firsthand experience could lead to exaggeration as he could remember the incidences to actually be more intense than they really were. Bluff Cove proved to be the next destination for the British soldiers as it was left unattended by the Argentines. Then, leaving them open to fire, the British proceeded to bring in supplies via boat which was obviously potentially hazardous, however it saved them a lengthy trek across bogs and mountains. Despite two loads being successful, two British ships, 'Sir Galahad' and 'Sir Tristram' were bombed by Argentine air planes. There were up to 50 British servicemen killed by the blasts and also another 150 injured. A public figure today, Simon Weston was injured at Bluff Cove, and had severe burns which covered his body. Source 16 shows the return of the British soldiers to the shore after the attack on Sir Galahad. The picture clearly depicts the happiness of the soldiers returning and shows how relieved they were to be safe and in good health. However, keeping in mind the ordeal they had just been through, there would have been an obvious sense of discontentment and fear amongst the soldiers. However, the source fails to explain the feelings of the families of the injured and dead and also doesn't tell us the extent of the injuries obtained by the soldiers such as Simon Weston. The source is trusty as it is primary, photographic evidence which is clearly from the time of the event as 'Sir Galahad' can be seen burning in the background. ...read more.

There were also minor groups affected by the Falklands war such as the medics who were forced to use cruise liners for hospital ships which would disadvantaged them and made it harder for them to give the necessary care. As well as this, they would have to deal with horrific injuries which would have been distressing. The media was also affected by the war, as despite having many stories to report, the government enforced censorship on their writing and monitored what was written. The war could also be a very dangerous time for reporters as people like, Robert Fox, were sent on ships with soldiers so they could report back to the UK on the events happening- this obviously put their lives at risk. Also, there was a great contrast between the tabloids the more serious newspapers, with the tabloids releasing brash stories of victory on the part of the British soldiers, whilst others reported the subject more sensitively. However, both newspapers always reported the success of the British soldiers, never their downfalls. To conclude, I think the events at Bluff Cove had the most devastating affects on people as there were an extensive number of casualties and also one fifth of all British fatalities occurred there. Also, the media had great coverage on this event, writing about it in much detail and also unveiling many graphic images. I would deem the Argentine soldiers to be most affected by the war as many of them were conscripts so had little knowledge of the physiological or physical strains that would be placed upon them. As well as this, they were poorly trained, badly equipped and ill informed. However, I also think the islanders were harshly affected due to them having to live in the middle of a modern war zone. ?? ?? ?? ?? April 21, 2009 BY NIA DAVIES 1 ...read more.