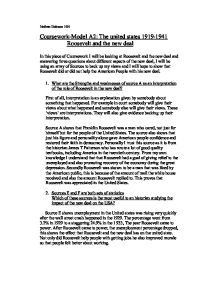 Nathan Dobson 10N Coursework-Model A2: The united states 1919-1941 Roosevelt and the new deal In this piece of Coursework I will be looking at Roosevelt and the new deal and answering three questions about different aspects of the new deal, I will be using an array of Sources to back up my views and I will hope to show that Roosevelt did or did not help the American People with his new deal. 1. What are the Strengths and weaknesses of source A as an interpretation of the role of Roosevelt in the new deal? First of all, interpretation is an explanation given by somebody about something that happened. For example in court somebody will give their views about what happened and somebody else will give their views. These 'views' are interpretations. They will also give evidence backing up their interpretation. Source A shows that Franklin Roosevelt was a man who cared, not just for himself but for the people of the United States. The source also shows that just his figure and personality alone gave American people confidence and restored their faith in democracy. Personally I trust this source as it is from the historian James T Patterson who has wrote a lot of good quality textbooks, including America in the twentieth century. From my own knowledge I understand that that Roosevelt had a goal of giving relief to the unemployed and also promoting recovery of the economy during the great depression. ...read more.

It also explains his goals are that all the forces of the community should be directed to making life better for the ordinary people. An example of this is the alphabetical agencies. The picture in source D shows Roosevelt visiting the Civilian Conservation corps (CCC) in Virginia. The people in the picture look very happy and President Roosevelt has a beaming smile aswell, This shows that the people of the USA are happy with the job Roosevelt is doing, and also getting them and other people back into work. It also shows that people are enjoying their job and enjoying working. I know from my studies that More people in work and earning money means that they will buy more goods which will help the economy as more money is being circulated. Source A shows that Roosevelt was bold as he wanted to help ordinary people and express their needs, which is always a difficult task for any President in any country, especially one the size of the United states. But President Roosevelt took on this challenge as was much appreciated by the public for it. As shown by the amount of mail that the white house was sent every day. This is also connected with Source B as the President is sent a letter from an ordinary person who is talking about his/her appreciation to him. ...read more.

In Source J, I researched several websites and found www.memory.loc.gov This particular website showed me that Roosevelt's New deal came into effect quickly after he was nominated in 1933. The first days in office as president saw him pass banking reform laws, Relief programs, Work relief programs, and agricultural programs. An example of these programs was the Civilian Conservation Corps or just CCC. Many Agencies came to be known by their acronyms just like the CCC. This showed that Roosevelt was daring as he knew their was something seriously wrong with the United States, and he needed to address that straight away, And the downside to acting on something straight away was that he wouldn't know how the Public would react back at it. Fortunately for Roosevelt In 1939 The new deal had run its course and many people in America was running a better life due to the new deal and what Roosevelt did for them. In conclusion I agree with the Interpretation because Roosevelt was bold as he used different techniques to tackle problems in the United States that many Americans would have been used to and therefore he didn't know how they were going to react back to it, He was also bold because he address problems by listening to the public and getting their views although, he may have not addressed problems that affected the rich, or big companies as shown in the joke on Source F, as the big companies say they are doing all of the work, this was why he was not bold enough. ...read more.