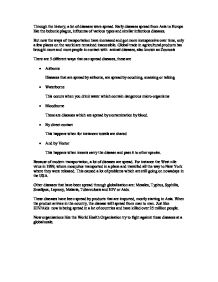 Globalisation of Diseases. Early diseases spread from Asia to Europe like the bubonic plague, influenza of various types and similar infectious diseases.

Through the history, a lot of diseases were spread. Early diseases spread from Asia to Europe like the bubonic plague, influenza of various types and similar infectious diseases. But now the ways of transportation have increased and got more inexspensive over time, only a few places on the world are remained inaccesible. Global trade in agricultural products has brought more and more people in contact with animal diseases, also known as Zoonosis There are 5 different ways that can spread diseases, these are * Airborne Diseases that are spread by airborne, are spread by couching, sneezing or talking * Waterborne This occurs when you drink water which contain dangerous micro-organisms * Bloodborne These are diseases which are spread by contamination by blood. ...read more.

This caused a lot of problems which are still going on nowadays in the USA. Other diseases that have been spread through globalisation are: Measles, Typhus, Syphilis, Smallpox, Leprosy, Malaria, Tuberculosis and HIV or Aids. These diseases have been spread by products that are imported, mostly starting in Asia. When the product arrives in the country, the disease will spread from man to man. Just like HIV/Aids now is being spread in a lot of countries and have killed over 25 million people. Now organisations like the World Health Organisation try to fight against these diseases at a global scale. Population goes to town Population goes to town can also be seen as Urbanisation. ...read more.

Urbanisation happens because the agriculture, local services and small-scale industries are being replaced by modern industry and big office buildings. People also tend to live nearby their work. The city offers more services to the people, and for instance elder people are forced to move into the city as they need the hospital for health problems. Also the city offers more entertainment and a better quality of education. Urbanisation has only been increasing over the last 100 years. China is rising the fastest, it took them 22 years to go from 17% Urbanised to 32%. England did 120 years over this, The US 80 years and Japan over 30 years to accomplish this. ...read more.