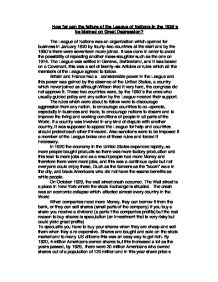 How far can the failure of the League of Nations in the 1930�s be blamed on Great Depression? The League of Nations was an organization which opened for business in January 1920 by fourty-two countries at the start and by the 1930�s there were seventeen more joined. It was done in order to avoid the possibility of repeating another mass slaughter such as the one on 1914. The League was settled in Geneva, Switzerland, and it was based on a Covenant, this was a set of twenty-six Articles or rules which all the members of the League agreed to follow. Britain and France had a considerable power in the League and this power was gained by the absence of the United States, a country which never joined as although Wilson tried it very hard, the congress did not approve it. These two countries were, by the 1930�s the ones who usually guided policy and any action by the League needed their support. The rules which were about to follow were to discourage aggression from any nation, to encourage countries to co-operate, especially in business and trade, to encourage nations to disarm and to improve the living and working conditions of people in all parts of the World. ...read more.

This was a huge crisis and many people committed suicide. Historians do not agree about how successful the League of Nations was in the 1920�s. However, in contrast, they agree that in 1930�s it was a failure. How far can the failure of the League of Nations in the 1930�s be blamed on Great Depression? This can be answered in two ways. In one side, YES the League of Nations failed because the Great Depression because of many factors. To begin with, unemployment caused by the Great Depression made powerful countries within the League of Nations to pay more attention in domestic problems instead that in international conflicts. For example Britain was suffering high unemployment so they didn't involve in sorting out international disputes. In Germany, unemployment rose sharply beginning in 1929 and by early 1932 it had reached to 6 million workers. Many countries didn't want to impose economic sanctions because they thought this would damage their own economy. The Wall Street Crash produced much unemployment and this cause polarization. This means that extremist as the Nazi were elected to solve economic and political problems to overthrown the treaty. ...read more.

To start with, the British and the French failed to take the situation seriously as they were desperate to keep good relations with Mussolini, who seemed to be their strongest ally against Hitler with whom they signed an agreement in 1935 known as the Stresa Pact, to stand united against Germany. The League had to do something and the aggressor was clearly showed but decisions were done very slow and it said that it could not claim this problem as it was in an inaccessible part of the world and a committee was done to agree what sanctions were about to be imposed to Italy. More important still, the Suez Canal belonged to Britain and France and it was the Italians�main supply route to Abyssinia and closing it could have resulted in war with Italy, this failure affected very much Abyssinia. After studying the League of Nations and the Great Depression I conclude that the League of Nations failed in the 1930�s because of many factors and one of these factors was the Great Depression. I think it was a very important cause of the failure of the League because of the harsh consequences it had over the European countries but it wasn't the only one, many things lead to its failure. ...read more.