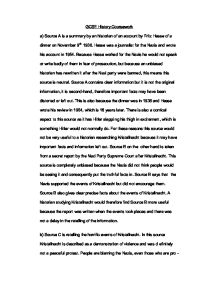 GCSE History Coursework a) Source A is a summary by an historian of an account by Fritz Hesse of a dinner on November 9th 1938. Hesse was a journalist for the Nazis and wrote his account in 1954. Because Hesse worked for the Nazis he would not speak or write badly of them in fear of prosecution, but because an unbiased historian has rewritten it after the Nazi party were banned, this means this source is neutral. Source A contains clear information but it is not the original information, it is second-hand, therefore important facts may have been distorted or left out. This is also because the dinner was in 1938 and Hesse wrote his review in 1954, which is 16 years later. There is also a comical aspect to this source as it has Hitler slapping his thigh in excitement, which is something Hitler would not normally do. For these reasons this source would not be very useful to a historian researching Kristallnacht because it may have important facts and information left out. Source B on the other hand is taken from a secret report by the Nazi Party Supreme Court after Kristallnacht. This source is completely unbiased because the Nazis did not think people would be seeing it and consequently put the truthful facts in. ...read more.

On the other hand, Source D makes it less likely that Source C happened because it says that the German people were the ones who started terrorising the Jews and they were also the one who wanted the Jews out. d) Both sources, F and G were publishes in newspapers or magazines. Source F was published in a Russian newspaper on the 10th November 1938 and Source G was published in a British magazine on the 30th November 1938. These sources therefore have similar publications. Source F shows Tzar Nicholas II, who encouraged the war against the Jews but who did not necessarily organise it. The result of his encouragement was the loss of his life and his country getting taken over by communists. This source is the Russian Tzar warning the German Nazi that by fighting against the Jews, everything will go wrong. Source G shows the body representing German Jews and the woman, who is wearing armour, bound and gagged, representing the normal German person. Because she is gagged, it means that normal German Jews are unable to do anything about the ill treatment of the Jews and they have no freedom of speech. The messages of both sources are very similar in the way that they are both warning the Nazi's that persecution does not work. ...read more.

that the police has supplied SA men with axes, tools and ladders and a list of names and addresses of all Jewish shops and flats. This means that it must have been planned because they would have had to prepare a list of the names and addresses. Source F also gives us the impression that the events were planned it shows Tzar Nicholas II warning a Nazi that attacking the Jews doesn't do any good and this was what they were planning to do. Likewise we can tell from Source G that the events were planned because it shows the figure representing the German public bound and gagged meaning that they couldn't of had a spontaneous outburst of anger because they had no means to attack the Jews. The final source that tells us that Kristallnacht was planned is source H that tells us that a lot of Jewish property of economic value was destroyed; meaning that the attack must have been planned so they knew was Jewish properties to attack. In conclusion, most sources show that the events of Kristallnacht were not spontaneous and had been planned and carried out by the SS, SA and Stormtroopers who had been supplied with weapons of destruction such as axes and with names and addresses of Jewish people and businesses. ...read more.