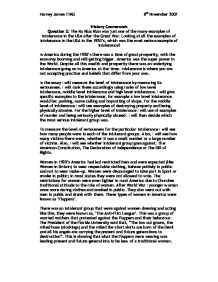 History Coursework Question 2: The Ku Klux Klan was just one of the many examples of intolerance in the USA after the Great War. Looking at all the examples of intolerance in the USA in the 1920's, which was the most serious example of intolerance? In America during the 1920's there was a time of great prosperity, with the economy booming and still getting bigger. America was the super power in the World. Despite all this wealth and prosperity there was an underlying intolerance going on in America at the time. Intolerance is where you are not accepting practice and beliefs that differ from your own. In the essay I will measure the level of intolerance by measuring its seriousness. I will rank these accordingly using ranks of low level intolerance, middle level intolerance and high level intolerance. I will give specific examples to the intolerance, for example a low level intolerance would be: pushing, name calling and boycotting of shops. For the middle level of intolerance I will use examples of destroying property and being physically abusive. For the higher level of intolerance I will use of examples of murder and being seriously physically abused. I will then decide which the most serious intolerant group was. To measure the level of seriousness for the particular intolerance I will see how many people were in each of the intolerant groups. Also, I will see how many victims there were, whether it was a small number or a large number of victims. Also, I will see whether intolerant group goes against: The American Constitution, The Declaration of Independence or The Bill of Rights. Women in 1920's America had led restricted lives and were expected (like Women in Britain) to wear respectable clothing, behave politely in public and not to wear make-up. Women were discouraged to take part in Sport or smoke in public; in most states they were not allowed to vote. ...read more.

Firstly, there were beatings up, name calling, pushing and boycotting of shops and businesses. This goes against the Bill of Rights, it clearly states about the, "Freedom of Religion". The intolerant group in my opinion are jealous of their success and are therefore targeting them because of their religion. Also this could be seen as being very hypocritical as they have all descended from immigrants. Finally, they are going against the Statue of Liberty, "...Your huddled masses yearning to be free". This is stating that America welcomes those seeking freedom and a new life. The intolerance is more serious than the Theory of Evolution, because there were beatings up of the group not tolerated and vandalism. Whereas, he other intolerance persuaded 6 states to change their laws. However, this is not as serious as Communism and Anarchism as being were not being falsely arrested and wrongly sentenced to death. Americans were very paranoid about Communism. They were concerned about Anarchists; this is because the American President William McKinley was assassinated by Leon Czolgosz in 1901 he was an Anarchist. The threat of Communists in America was very little and there was a percentage of 0.1% that was actually Anarchist. Americans feared that Communism would spread from Russia because they had overthrown the Russian government. The paranoia of the Americans outweighed the threat. The intolerant group were again, White Anglo Saxon Protestants (WASPs). The vast majority of America was White Anglo Saxon Protestants; also the intolerant group had power in high government and therefore had an advantage over the Communists. The group that were not tolerated were the communists or anarchists. They were coming over to America by the numbers and this frightened the Americans. They feared that they would bring new ideas to American society they feared this greatly. In 1920 the Palmer Raids took place this was where they arrested 6000 suspected communists and they were put in prison. ...read more.

They have a strong belief in 'White Supremacy'. They often use violence and intimidation to scare groups that they are against, for example Black People. Even after the abolishment of slavery the Klan and WASP's found it difficult to accept this. People still remained prejudice towards Blacks. The intolerant group were Ku Klux Klan (KKK). They felt that black people were inferior to white people, they also believed inter-marriage was wrong. In the southern states of America they believed in segregation. This is where black and white people are kept in separate areas. For examples not being allowed to the same schools, allowed on the same bus and the same restaurants. In total there were about 5 million members. The group that were not tolerated were Black people. They were harshly treated and in southern states they were segregated. They were also forced to live in the ghettos of America and the worst areas. The Ku Klux Klan used extreme violence, terrible beatings up, set fire to houses and schools. Also, they used extreme forms of violence in particular murders. This form of extreme violence occurred a lot. The intolerance for this is high level; this is due to it using extreme violence. This goes against the Declaration of independence, this is because it says "All men are born equal". The Klan does not believe this. Also, this goes against the Bill of Rights, "Everyone is entitled to a fair trial". A jury at a black person's trial were always white. The intolerant group had 5 million members this is showing it is a very large group. The KKK intolerance has been placed last as the highest level intolerance. This is because the intolerant group and the group not tolerated have huge numbers and it involves a lot of America. Also they were very violent for example: extreme violence, terrible beatings up, setting fire to houses and schools. Also there were murders. All of these acts go against the foundations of America, the Bill of Rights and the Declaration of Independence. Harvey James 11KG 8th November 2007 ...read more.