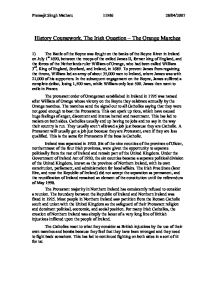 History Coursework. The Irish Question - The Orange Marches 1) The Battle of the Boyne was fought on the banks of the Boyne River in Ireland on July 1st 1690, between the troops of the exiled James II, former king of England, and the forces of the Netherlands ruler William of Orange, who had been called William 3rd, King of England, Scotland, and Ireland, in 1689. To prevent James from regaining the throne, William led an army of about 35,000 men to Ireland, where James was with 21,000 of his supporters. In the subsequent engagement on the Boyne, James suffered a complete defeat, losing 1,500 men, while William only lost 500. James then went to exile in France. The protestant order of Orangemen established in Ireland in 1795 was named after William of Orange whose victory on the Boyne they celebrate annually by the Orange marches. The marches send the signal out to all Catholics saying that they were not good enough to beat the Protestants. This can spark up riots, which have caused huge feelings of anger, discontent and intense hatred and resentment. This has led to r****m on both sides. Catholics usually end up having no jobs and no say in the way their country is run. They usually aren't allowed a job just because they are Catholic. A Protestant will usually get a job just because they are Protestant, even if they are less qualified. ...read more.

A year later, he was a victim of a loyalist attack, and was shot several times in the back of a car as it drove through central Belfast. In 1986, he published his book Politics of Irish Freedom, which presented his own political views to an external audience while offering Sinn Fein an internal discussion document. During the late 1980s, he also became mildly critical of IRA killings of civilians, which he argued were dangerous to the Republican cause. He was defeated in the 1992 election, losing his West Belfast seat. From 1986, Adams was involved in talks with the Social Democratic and Labour Party (SDLP) constitutional nationalist leader John Hume. Together they were substantially responsible for creating the conditions for the declaration of an IRA ceasefire in August 1994. In October 1994, President Bill Clinton lifted an official ban on government contacts with Sinn Fein, and met with Adams in March 1995. However, the IRA's restart of violence in February 1996 (a move Adams refused to condemn) seriously damaged his credibility as leader of the Sinn Fein. In March 1996, he tried to join talks in Stormont Castle, Northern Ireland's parliament building, on elections to a forum to select teams for all-party negotiations in Northern Ireland, but was turned away; he promised Sinn Fein participation in the elections but not the forum itself. Following Sinn Fein's success in the May 1996 elections, he declared the party ready to accept previously agreed proposals on arms decommissioning, but was refused participation in all-party talks until the IRA resumed its ceasefire. ...read more.

They also feel a need to strike back whenever they are attacked. This causes repeated gang fights and terror attacks on both sides continuously. People have to learn that they have to stop violence and most of all change their views if there is ever to be lasting peace in Northern Ireland. To reach peace several things have to be achieved first. The decommission of weapons from both the sides in the conflict have to be carried out first. This will stop the feeling of threat from both sides and will allow them to get on better with each other. Racial discrimination has to stop. Being r****t will only cause more violence, as people will find the need to strike back in defence. People will have to change their views, as it is mainly this that has caused all the r****m and hate in Northern Ireland, which has led to violence. People have to fully and truly forgive each other, as it is only this that will stop grievances with each other. The marches have to stop as they just add fuel to an already burning fire. Children will have to be taught what is right and wrong. They learn to hate the other party from their parents, which in turn continues the hate campaign in Northern Ireland. Lastly, they have to learn to live with each other in peace and harmony. Until these things are carried out in full with complete dedication and discipline, Northern Ireland will never see peace. Premajit Singh Matharu 11M6 29/10/2001 ...read more.